In this dose of peer-reviewed skeptical literature about climate change, we look into Journal of Climate. Roy Spencer and William "Danny" Braswell wrote the paper called

PhysOrg.COM offers you a press release:

They cleverly play with a theoretical toy model to demonstrate the wrong conclusions about the feedback strength that models and modelers often make - an approach that clearly makes theorists like myself happy. When the fixes are done, the climate sensitivity is shown to be much smaller. We have discussed this issue several times. For example, read the May article Spencer vs RealClimate.

For the sake of balance, let us also look at some cutting-edge research by the alarmist camp where the debate is already over so they can focus on more far-reaching aspects of climate science, including sociology and psychology. ;-)

At the beginning of 2007, Ellen Goodman discovered that climate skeptics were just like the holocaust deniers. The Right Reverend Gordon Mursell of Stafford (The Church of England), the Gentleman on the right side of the picture, has invented a better theory:

Recall that Josef Fritzl of Austria (the left Gentleman on the picture) has created a shadow, six-children family with his daughter that has been locked in the basement for decades. Now, Dr Mursell says:

You could argue that, by our refusal to face the truth about climate change, we are as guilty as he is.

Needless to say, Dr Mursell is an excellent scholar so he also constructs a perfect proof of his statement, according to the AGW and IPCC standards:

We are in effect locking our children and grandchildren into a world with no future and throwing away the key.

Sounds convincing, doesn't it? :-) Mursell's theory has impressed most thinkers who believe the catastrophic man-made global warming. An isomorphism between the climate skeptics and a child molester is exactly the type of science that the IPCC expects and that the taxpayers from U.N. member countries pay for - which is why almost no one has complained. Excellent! 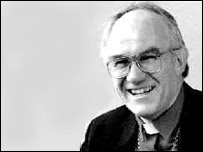 Mursell's colleague in the Church of England, Dr Peter Forster of Chester, was less lucky. Last week, he called "to allow science, not emotion, [to] lead the debate on global warming" which is a scientific "open question". Wow, what an explosive blasphemy! ;-)

Hasn't Forster noticed that, as pointed out in Mursell's profound words, science is just a lame excuse to do nothing and to continue with sins? What do you think that happened after Forster's shocking words?

The article above also mentions another British-born heretic, Freeman Dyson. Friends of the Earth who plan the acquisition of the brotherly Church of England were particularly upset. They emphasized: "The debate is over. The alarm bells are ringing." Amen.

Well, it doesn't seem that the Church of England has a unified approach to the issue of the Anti-Christ.

The Church Times report on that.

Well, I think it is a kind of blasphemy that the Church of England allows degenerated intercourse-baskets of Mursell's type to scream in its cathedrals and to use the name of God to spread his witchcraft. ;-)
Luboš Motl v 7:10 AM
Share