UAH MSU have released their new satellite data for May 2008. The global anomaly was -0.17 °C, the coldest reading after January 2000 and the third coldest monthly figure after September 1993. 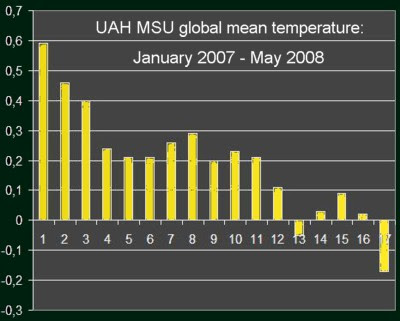 Yes, I mean that anomaly-wise, the May was even colder than all the cool months of 2008, despite the dramatically weakening La Nina that now seems likely to change to ENSO neutral conditions this month. For example, the month-on-month cooling from April 2008 was by 0.19 °C while May 2008 was more than 0.75 °C cooler than January 2007. See the trend since January 2007 above.

The average anomaly for the first five months of 2008 is negative. 1994 was the last year whose average annual anomaly was negative.

The Sun has been spotless at least for 9 days. The standardized May sunspot number was 2.9, equal to April, and the solar flux was even slightly lower than in April, namely 68.4.