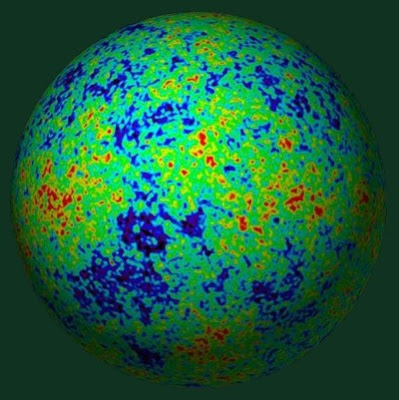 A lot of confusion - and downright nonsense - has been written about the power asymmetry of the WMAP data. The "contrast" of one cellestial hemisphere seems to be greater than the "contrast" of the other hemisphere.

Is there an asymmetry at all?

Yes, it has been described by Eriksen et al. in 2003. See also their 2007 update. It is not too strong but it is observable.

How do you divide the sky to the hemispheres?

There is clearly no "canonical" way to divide the sky but it just happens that the dividing plane that maximizes the asymmetry is rather close to the plane of ecliptic - i.e. the plane of Earth's orbit around the Sun. As you might know, this plane is also very close to the ecliptic plane of the Milky Way, i.e. our galaxy.

Is the asymmetry statistically significant?

Yes, it is. It is approximately by one order of magnitude larger than the expected strength of "noise".

Cannot you get rid of this effect by some trivial "fix"?

The answer is probably Yes. In 2006, Freeman et al. have shown that the asymmetry for "l" smaller than 8 disappears if the WMAP dipole vector is increased by 1-3 sigma (i.e. 2-6 km/s, from 368.11 km/s). The asymmetry at higher values of "l" probably goes away if the foreground near the ecliptic (the galactic processes that "pollute" the global picture near the "equator") is treated more carefully.


If that's not the case and if new physics is required, is the inflaton enough to create such an asymmetry?

No, the inflaton predicts nearly isotropic data. A new field that can modulate the power, known as the "curvaton", or something equally powerful would be required. With a new field, you can get all kinds of new effects, of course, including the differences between the two hemispheres.

If the asymmetry is "real", is it a specific problem for inflationary cosmology?

No, the asymmetry - if it were real - would be surprising for pretty much every "minimal" model replacing inflation, too. A slight modification such as the addition of a "curvaton" would be enough to account for it. But once again, the effect is probably not real, as discussed above: it is rather an artifact of a wrong dipole and ecliptic subtractions.

Is there a rationally justifiable link between these asymmetry questions and the arrow-of-time debates?

Not at all. All the hints referring to similar links are absurd and meaningless inventions of a Chris Lintott who likes to "promote" cosmology, primarily among the audiences with IQ below 20. BBC was helpful for such a goal and their recent article was, from a scientific perspective, a breathtaking junk.

Recall that the fantasies that there remains an unsolved "arrow of time problem" that could even be related to cosmology contradict the very basics of thermodynamics and statistical physics that have been known for more than 100 years.

Whoever misunderstands these things should take an undergraduate course of thermodynamics and statistical physics again because he or she is severely failing in these subjects.

Is there a known relationship between the multiverse ideas and the power asymmetry?