Today, Condoleezza Rice and her Czech counterpart, Karel Schwarzenberg, signed the Czech-U.S. treaty about the radar for the missile defense system: see AP. The ceremony took place in Prague. 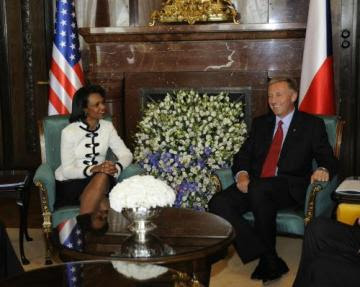 The treaty will become valid if it is approved by the Parliament - which is not quite guaranteed - and signed by the president.

About 3/5 of the Czech public is sadly against the radar in the Brdy Hills (see a map, the site is "3: kóta 718" meters above the sea level) and while I would be happier if they agreed with the facility, the left-wing and anti-American rants by the opponents assure me that they shouldn't be treated excessively seriously. After all, the site belongs to the army and not to the ordinary Joe (or Pepíček).

They didn't say a word when our country was full of nuclear warheads of a non-democratic country but they become true "heroes" once a defense gadget designed by a democratic country is at stake. Incidentally, among internet (idnes.cz) users, 3/5 of the people do agree with the radar. 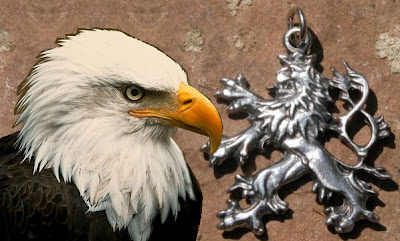 The bald eagle and the two-tailed lion, assertive symbols of the two countries

The U.S.-Polish negotiations about the interceptors in Poland are stuck: Poland wants too much help with an upgrade of their army. Lithuania is a possible alternative of Poland. In principle, Czechia could host both gadgets even though many people, including the pro-American ones, say that they don't want the rockets here.

I tend to think that the actual security benefits of the base will be limited in a foreseeable future but the symbolic value is high. On the other hand, for any sensible U.S. president, the capability brought by the facility is clearly positive and desirable! It doesn't have to be infinitely positive. By the way, Rice argues that the radar is useful even without the rockets.


And the American presence 25 miles from my home is something that increases my own feeling of safety and freedom - even though under some extreme circumstances or future scenarios, Barack Obama could change my mind. I hope he won't!

Click at the "missile" category below to learn more about the facility (including pictures from the occupation of the side by Greenpeace and other things).
Luboš Motl v 5:03 PM
Share