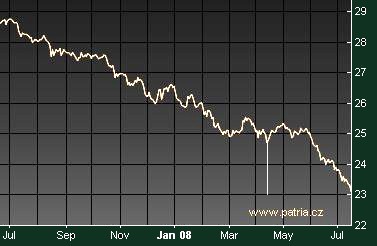 im
The graph above shows a function of time - between July 2007 and July 2008. Yes, it is an almost perfect decreasing linear function that may be predicted to hit zero in 2012. :-) If you look carefully in April 2008, the function includes a negative multiple of the delta function, besides a smooth component. The function suddenly dropped from 25.00 to 23.00 for a few hours (in Asian trading).

The event was labeled a black swan, a very unlikely and hard-to-predict event that sometimes influences the markets. (The name was chosen because black swans were unknown to the Europeans until they saw them in Australia of the 17th century.) It looked so crazy for a smooth quantity to suddenly jump to as unreasonably low a number as 23. 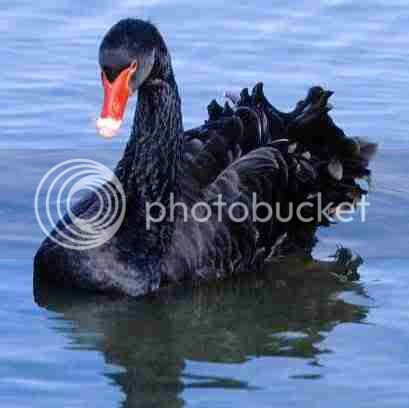 However, black swans may become pretty ordinary. In three months, namely 1 hour ago, the function dropped below 23 without any delta functions involved. Yes, it is an exchange rate - namely the number of Czech crowns per euro. If you think of the euro as a strengthening currency, you should look at the picture above to realize that your conclusion depends on the reference frame.

The dollar's motion has been more brutal. Because my reference frame was almost fully associated with the U.S. dollar until very recently, I can't tell you any details of my collapsing assets if you want to avoid a heart attack. ;-) But yes, I can tell you that USD went from CZK 44.5 sometimes in 2001 to 14.5 today - a decrease nearly by a factor of pi. Yes, it sucks. That's another reason to like the supernatural units where pi=1.

The Czech koruna has been the world's fastest strengthening currency for quite some time and indeed, there are some very good reasons behind this dynamics. The Big Mac index (assuming that McDonald's Big Mac should cost the same money everywhere, when converted by current rates) indicates that CZK is already slightly overpriced relatively to the U.S. dollar but it is still about 30% undervalued relatively to the euro - which is the main counterpart that CZK should be compared with (because it is the main currency exchanged for CZK) - so there is probably still a lot of room to go, especially if the fresh Czech GDP growth continues.