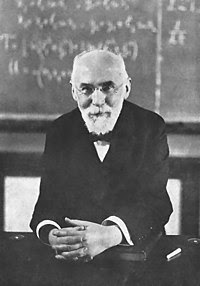 Hendrik Antoon Lorentz, one of the key physicists of the end of the 19th century and the beginning of the 20th century, was born in Arnhem, the Netherlands on July 18th, 1853.

As a kid, his teachers were annoying him with classical languages. However, he was influenced by his astronomy professor, Frederik Kaiser, and became interested in maths and physics soon.


His PhD thesis was about the reflection and refraction of light. When he was 24, he became the physics department chair in Leiden. Although he was writing about mechanics, hydrodynamics (numerical calculations about dams and flood control!), thermodynamics, and solid state theory, his most important contributions were concerned with electromagnetism and light.

Lorentz was a widely admired physicist. For example, Einstein wrote the following sentence about him, among others: "For me personally he meant more than all the others I have met on my life's journey."

In 1902, he shared the Nobel prize with Pieter Zeeman for the discovery and theoretical interpretation of the Zeeman effect (the splitting of spectral lines in the magnetic field). That was a rather cheap Nobel prize for Lorentz. The correct explanation clearly requires one to understand the quantized nature of the angular momentum (and magnetic moments) that Lorentz couldn't have understood: it was decades before quantum mechanics.

Today, his classical hand-waving would be "so-so" (grade: E) as a solution to an undergraduate homework problem. In 1902, it was enough for a Nobel prize for this quantum effect and the recipient was a guy who didn't quite accept quantum mechanics until the end of his life. ;-)

There are many things named after Lorentz. One of the things that are not named after Lorentz is the Lorenz gauge - "∂_mu A^mu = 0" - which is named after Denmark's Ludvig Lorenz even though 90% of scientific papers think otherwise. Lorentz and Lorenz together discovered the Lorentz-Lorenz equation for the index of refraction as a function of molar refractivity, pressure, and temperature.

The Lorentz force is the net electromagnetic force exerted upon a charged particle, q (E+v x B), and it was first formulated outside relativity. The Lorentz distribution, associated with the function similar to 1/(1+x^2), describes the reaction of a (damped) physical system to different frequencies near a resonance. Other effects named after Lorentz, such as the Lorentz transformation or the Lorentz contraction, are related to special relativity and I will discuss them in detail.

Hendrik Lorentz was one of the physicists who were closest to finding special relativity but he was simply unable to crack the "complete big picture" and abandon the absolute character of simultaneity, the most regressive among the classical, pre-relativistic prejudices, even though he was already writing about "local time" as early as in 1895 and 1899.

Lorentz himself believed in "some kind of an aether" but together with Einstein, he was actually the most important physicist who helped the world to get rid of that ludicrous concept. What did he do so important? Well, he wrote "vacuum" Maxwell's equations that only included one electric vector and one magnetic vector at each point (unlike E,D,H,B of the "material" Maxwell's equations) which showed that if the aether existed, it had to be as simple as the vacuum was after 1905. ;-)

And indeed, they were mentioned all over the place because Lorentz cared about these experiments a lot. In order to agree with the newest experiments, Lorentz kept on revising his edition of the "aether". For example, its length had to contract as a function of velocity and, following the early suggestions by George Francis FitzGerald, Lorentz was even able to deduce the right Lorentz factor: that's why we can call the effect Lorentz contraction even though Lorentz didn't have a crisp and modern justification of this effect (including the four-dimensional metric, for example).

Lorentz was also able to figure out that Maxwell's equations were invariant under a change of spacetime coordinates, i.e. the Lorentz transformations. Entertainingly enough, we currently use the term Lorentz group even though one of the main things Lorentz was unable to realize was that the coordinate redefinitions generated a group. Also, he couldn't figure out that these redefinitions had anything to do with the inertial reference frames in mechanics as discussed by Galileo - and that two observers in relative motion should be interpreted "democratically". Of course, any of these two realizations could (and did) abruptly lead to special relativity.

Anyway, he kept on adding seemingly bizarre but necessary effects associated with his "progressive aether" in order to avoid contradictions with the new experiments. At the very end, after a finite number of improvements, he had arguably something that was equivalent to special relativity in one particular inertial frame. But he was unable to realize that the theory was also valid in all other reference frames, even though he also knew the required Lorentz transformations that are known to be able to do the job. That also meant that he didn't have the tools to derive many other conclusions of special relativity such as the mass-energy equivalence.

This story may sound confusing and I have certain problems to understand how a leading physicist of Lorentz's caliber could have been unable to put these pieces together. And an even more puzzling fact is that after 1905, Lorentz temporarily became one of the most distinguished skeptics concerning special relativity (see a quote in the first fast comment).

But nevertheless, he was unable to do these things himself and they had to wait for Einstein who fully cracked the puzzle many years after Lorentz's aether musings. My guess is that without Einstein, special relativity would be found in less than one decade after 1905 and there would be a 50% probability that the discoverer would be from the list {Minkowski, Lorentz, Poincaré}.

Einstein chose a better strategy than Lorentz's permanent interaction with the experimenters who are often clever about minor things but intellectually limited about major issues (and who try to impose not only their hard data but also misleading interpretations upon the theorists): just sit down, go carefully through the available knowledge, and write down the correct theory of space and time from the scratch.

With Einstein's fresh mind, his approach turned out to be more successful but if you don't want to rely on such fresh minds around, I would agree that Lorentz's iterative approach was the most sensible strategy people could have followed to comprehend space and time. Still, whenever a physicist seems to be lost in a chaotic pile of seemingly unrelated laws and observations, it's good to try to return to the basics, see what insights are important and well-established, and reformulate them in new ways.
Luboš Motl v 7:57 AM
Share