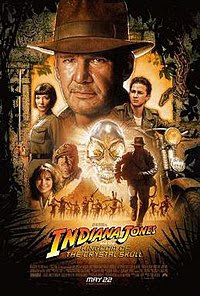 Last night, we went to a movie theater and saw

Indiana Jones and the Kingdom of the Crystal Skull

and I think it was very good.

Warning: Spoilers are found below.

In fact, I think it was better than some previous parts of Indiana Jones - I wasn't able to finish one of them because it looked boring to me.

Different people enjoy different kinds of movies. Many people like movies that mimic the reality. Well, I, for one, hate socialist realism. I also hate soap operas that are full of average characters who damage the lives of others in hundreds of random and average ways. I don't need to watch a movie to see these things in a movie theater (or TV) again.

Your humble correspondent prefers movies (the typical "American movies", but they don't have to be made in America, of course) with well-defined, strong, and positive heroes he can identify with, movies with strong emotions and major punch lines. To some extent, I like spectacular effects and unusual events, as long as they follow a kind of logic that should be neither excessively contrived nor overly naive.


The Russian communist party recently wanted the movie to be banned as an anti-Soviet propaganda. I don't share their viewpoint. In the movie, the Soviets were slightly more negative guys than the Americans, but so were they in reality. Otherwise, the movie described a rather balanced fight of two superpowers. Were the Soviets only sending the Sputnik to outer space in the 1950s? Give me a break. There were also millions of people dying under Stalin and the movie describes a more attractive Soviet Union than it actually was. In that decade, Stalin et al. didn't do quite the same things as those in the movie but they have surely had related intentions.

OK, so what is the plot?

A Soviet unit invades a military facility in Nevada. They are led by a rather attractive yet evil woman from Ukraine: I've known such types, too. ;-) She is the personal parapsychologist of Joseph Stalin himself and they look for a special ancient magnetic skull. Indiana Jones is forced to help them (finding out that his fellow agent was bought by the Russians) but he eventually escapes.

However, he arrives to a nuclear test town and the blast comes in 30 seconds. I believe that the pictures of the nuclear blast were realistic. A few seconds before the explosion, he hides himself into a kitchen fridge. The fridge flies for a few miles and then it opens, allowing Indy to see the mushroom. Soon afterwords, he gets a shower.

Well, it wouldn't happen exactly in this way but it could have been in the ballpark of reality. I find it obvious that there exists a place near the atomic blast where you would die outside the fridge but survive inside the fridge, especially if the cavity were lead-lined. The basic idea wasn't absurd: it was just improved in order to make the effects more spectacular, and I am convinced that this is what fiction movies should be doing.

Nevertheless, some people seem to be very irritated by the scene and they began to use the term "nuke the fridge", analogous to "jump the shark". I personally think that these critics are narrow-minded people. While it might be fair to say that similar physics scenes haven't appeared in the previous parts of the series, it doesn't mean that they're "worse arts". In my opinion, they may be better arts.

If I return to the plot, Dr Indiana Jones et al. are employing careful analyses of the ancient Mayan texts to uncover some details about the mysterious extraterrestrial skull and its purpose (imagine a lot of funny car chasing, gigantic South American ants that eat people, pretty water falls, and tense interactions with Indy's ex-girlfriend Marion and a young guy who could be his son) and eventually manage to return it to a Peruvian hall (opened by a huge stony "lock" with sand) with 12 similar skulls that share consciousness.

Meanwhile, the Ukrainian bitch and her comrades also arrive there, and because the skulls want to give their saviors - including the Soviet spies - a great gift, she tells them that she wants to know "everything".

So the extraterrestrial magnetic skulls unify into one being and transfer all of their knowledge into her brain. She overheats a bit and disappears. ;-) Meanwhile, a new dimension of space in the Randall-Sundrum braneworld opens, a spaceship leaves the Earth, and the extraterrestrials cover all the traces they could have left in Peru.

At the end, Prof Indiana Jones becomes the associate dean of a college and marries Marion: and yes, the young guy he has worked with for a long time is their son, after all. Well, you might think the plot is ludicrous but it is nice to watch it!
Luboš Motl v 9:46 AM
Share