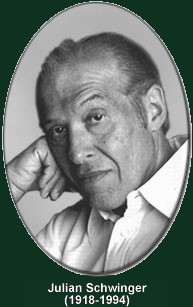 Julian Schwinger (*1918) died 14 years ago, on July 16th, 1994. His adviser was Isidor Isaac Rabi, a Nobel prize winner. Schwinger himself shared his 1965 Nobel prize with Feynman and Tomonaga.

Four students of Schwinger received a Nobel prize, too: Glauber (in 2005), Mottelson (with Bohr's son), Sheldon Glashow (in 1979), and Walter Kohn (for chemistry: yes, the KITP Kohn Hall is named after him). Glashow's grateful memories of Schwinger are here.

Schwinger did most of his key work at Harvard University. During his life, he was affiliated with CCNY, Columbia, Berkeley, Purdue, MIT, and UCLA. He was more formal a physicist than e.g. Feynman.

Julian Schwinger liked to use Green's functions because he used to work with radars during the war. ;-) He was among the first people who have isolated the first finite one-loop correction - to the electron's anomalous moment. If you forgot the coefficient, look at his grave and you will see it is "alpha/2 pi".

The Schwinger effect is the spontaneous creation of charged particle-antiparticle pairs in an electric field. Schwinger found new and elegant proofs to the CPT theorem and the spin-statistics theorem originally due to Pauli. He found various loop corrections to certain classical identities - we call them anomalous Schwinger terms and they were essential for the development of anomalies.

The Lippmann-Schwinger equation is satisfied by the scattering states in ordinary quantum mechanics. On the other hand, the Rarita-Schwinger action is a unique action for spin 3/2 fields. The only consistent way to add interactions for these fields is to have supersymmetry: the fields then become gravitinos. Schwinger used to be sorry that he didn't spend more time with this issue because he would have surely discovered supersymmetry before others did! ;-) In fact, I find it plausible.


His personal version of low-energy effective field theory is called Schwinger's source theory. This research was criticized as boring by some of his Harvard colleagues so he left for UCLA at some moment. The ultimate proof that he was able to escape from the mainstream came after 1989 when he wrote about 8 papers about cold fusion ;-) and protested that some "conformist" bastard referees have rejected them. I would agree with him that we don't have a complete proof that there exists no complex arrangement that would allow the nuclei to tunnel through the electromagnetic barriers separating them from others - I just find it much less likely than he did.

The Schwinger model is an exactly solvable toy model for a gauge theory, a two-dimensional QED with a Dirac fermion that leads to the spontaneous U(1) symmetry breaking via a chiral condensate: the photon acquires a mass. The Schwinger parameter is the variable "x" that you integrate "exp(-xA)" over in order to get "1/A", the propagator: it emerges as the field-theoretical limit of the moduli of Riemann surfaces, i.e. the integration variables that occur in perturbative string theory.

Schwinger was the first theorist to realize that neutrinos should form doublets with charged leptons - a prediction confirmed by Leon Lederman et al. The Schwinger-Dyson equations are functional differential equations that are exactly satisfied by the correlation functions. Although this discovery and Schwinger's variational principle - a differential version of the path integral - made it possible for the fermionic integration to be uniformly incorporated into Feynman's path integral, he didn't like the path integrals - at least not openly. He described them as follows:

Like the silicon chips of more recent years, the Feynman diagram was bringing computation to the masses.

Just to be sure, when you're compared to the inventor of computer chips and connected with the masses, it's not supposed to be the best compliment you could get from Schwinger. :-) He banned the Feynman diagrams in his class. However, some people have seen Schwinger as using path integrals in the privacy. When Feynman died, Schwinger described him as

an honest man, the outstanding intuitionist of our age, and a prime example of what may lie in store for anyone who dares to follow the beat of a different drum.

I would say that it is partially a matter of social conventions who is considered to be the mainstream guy and who is the maverick. With the papers about cold fusion and complaints about the threatened academic freedom, Schwinger could be counted as a maverick, too. On the other hand, the Feynman diagrams have really become a part of the mainstream even though Schwinger's equation-based and operator-based approaches continue to have a very conservative feel to them.
Luboš Motl v 9:01 AM
Share