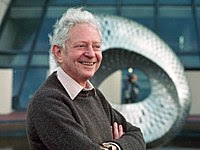 He is the 1988 physics Nobel prize winner for their discovery of the muon neutrino; let me neglect all other awards. Lederman was born in New York to a Russian Jewish family and did many things, becoming Fermilab's director in 1979: he is still the Director Emeritus. He coined the colorful term "God particle" for the electroweak-symmetry-breaking boson.

But I want to say a few words about their Physics First movement trying to reorganize high-school education so that kids learn chemistry and biology after they know some physics.

To some extent, this wrong system and the universities are to be blamed for the general ignorance, he says in the video below. It's terrible that even high school teachers are uncertain about maths and physics because they're pumping the same insecurity into the kids.

I am not going to be a fanatical advocate of this viewpoint but I essentially do agree with it. I used to have problems with my 300-pound high-school chemistry and biology teacher but even if I subtract this personal issue, chemistry sucked.

It contained a lot of superficial, misleading, oversimplified quantum physics that I wasn't quite ready to accept at that point: these things had to wait until the end of the high school when I really learned quantum mechanics. This limited degree of my belief reduced my interest in the subject and it looked like a lot of meaningless memorization to me.


For two decades, I haven't looked whether those hundreds of organic compounds were really necessary or useful for something. Most of them were probably not. Well, even with "physics first", there would be a lot of things that I would dislike. But it is clear that much later, I became much more excited about chemistry and biology than how I was feeling at the high school. ;-)

Even when you consider more general kinds of teenagers, "physics first" would mean that the kids understand the world "from the first principles".

It is not clear to me whether such a goal would have good practical consequences but I am convinced that in a far future, when our society becomes truly scientific, children will be taught physics before chemistry and biology because the unity of science will be appreciated and the inverse approach is really illogical. The inverse approach can only be justified by (false) assumptions about the "independence" of different scientific disciplines.

They are not independent. For sociological reasons, chemistry and biology are often studied by different tools and different people than what we call physics today but they are still parts of physics in the invariant sense.

A frequent criticism of the "Physics First" paradigm is that biology is more accessible to (typical) students who are not too good at math. Well, it is certainly more accessible to them but this fact doesn't imply that by learning biology without its origin in physics, they faithfully learn what science actually is. This "biology only" approach leads many people to think that science is about a random empirical search for statistical patterns of the type "garlic is probably good for your health" and about parroting what (other) scientists have said.

Consequently, many people become unable to understand that science can sometimes actually understand - and predict, using purely theoretical tools - the real world. That you can actually do it yourself if you learn how to do it, instead of asking Nature (or "scientific consensus") for the answer to every single question. Because of this reason, I would find it more appropriate for students to be taught a "simplified" version of the required maths and physics (where they are allowed to "memorize" various implications without knowing how to derive them mathematically) instead of the picture where the math-heavy physical basis is completely omitted.

It is plausible that children will always be taught "separate subjects" of science but the relationships between them will become much clearer than they are today. It seems that today, the authors of different textbooks etc. don't interact with each other. For most people, the boundaries between the disciplines remain shrouded in mystery. That's one of the reasons why many people approach the word "interdisciplinary" with religious feelings.

They are unsubstantiated because virtually all boundaries between scientific disciplines - e.g. between physics and chemistry - are well understood by science while the boundaries between many other pairs of disciplines are much shorter and less important than many people want to believe. The very existence (and location) of boundaries between disciplines is just a sociological convention, not a deep insight about the essence of the world.
Luboš Motl v 2:01 PM
Share