LHC to be cooled down by July 14th

Exactly for 14 years, physicists have been waiting for the powerful 14 TeV machine. Finally, on July 14th, the French national holiday which is less than 14 days from now, the gadget should be cool enough to accelerate protons (or during the week that follows). Note that the first sentence has 14 words and the prophecy about the destruction of the world by the LHC appears in Revelations six:14. ;-) 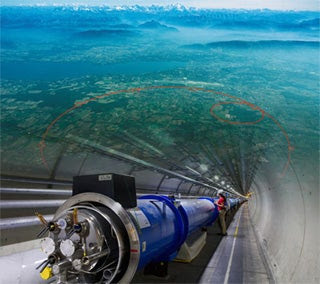 Click the picture for a Scientific American story. George Smoot (COBE, 2006 award) turns out to be most bullish - or progressive - Nobel prize winner as far as the prospects of the LHC to observe extra dimensions or other stringy signatures go. Even more bullish than your humble correspondent. ;-)


David Gross, who describes himself as a more conservative physicist :-), says some fun things, too. Incidentally, he has also made the same bet as your humble correspondent, on the same side - that supersymmetry will be seen at the LHC. On the other hand, Gerard 't Hooft predicts "the end of particle physics" once Higgs is not seen at the LHC although it exists. ;-) Read the other things, too.

The date of this posting will be edited whenever new important events occur at the LHC.
Luboš Motl v 3:46 PM
Share