Lindau: Half of Nobel prize winners are skeptical about AGW orthodoxy 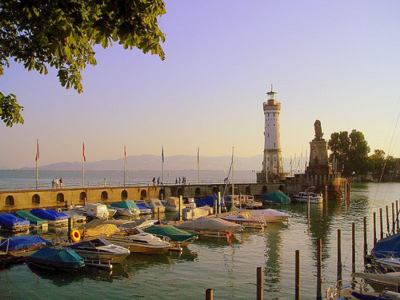 Climate: one screen below...

Much like every year since 1951, there has been another meeting (6/29-7/3) of Nobel prize winners in Lindau, Bavaria, Germany.

David Gross: LHC and superworld (you can also click at dozens of other videos there)

In the high-energy panel, Martinus Veltman has said some really stupid things about the relationships between astrophysics, cosmology, and high-energy physics. He essentially argued that astroparticle physics doesn't exist or shouldn't exist and that it was "idiotic" to argue that the LHC will recreate the Big Bang.

In fact, it is not just a popular cliché. Physicists themselves describe the temperature - or energy per particle - and directly map it to a particular moment after the Big Bang because the typical phenomena that occur at a certain energy scale are also directly relevant for a particular era of the early cosmology. If you allow me to summarize, the LHC will recreate the Big Bang.

Gross and Smoot agreed with my position above but their answer wasn't sufficiently colorful to waste the dear TRF readers' time. ;-)

So let us look at the climate & energy panel instead.

Ivar Giaever (Norway), the 1973 Nobel prize winner for superconductivity (he was essential to master electron tunneling in superconductors and shared the physics award with Esaki and Josephson), was asked how the world should tackle climate change. The following quote accurately matches the content but it was shortened and edited:

"First of all, I didn't volunteer to be on this panel. Second of all, I am a skeptic, as I told you yesterday. Third of all, if I am Norwegian, should I really worry about a little bit of warming? I am unfortunately becoming an old man. We have heard many similar warnings about the acid rain 30 years ago and the ozone hole 10 years ago or deforestation but the humanity is still around. The ozone hole width has peaked in 1993.

Moreover, global warming has become a new religion. We frequently hear about the number of scientists who support it. But the number is not important: only those who are correct are important. We don't really know what the actual effect on the global temperature is. There are better ways to spend the money [question period]," he referred to a lecture about poverty by Hans Rosling (Sweden) that heavily relied on my favorite Gapminder: well, he is the director of the Gapminder Foundation. ;-)

Ivar Giaever had done some "Google research" before the panel so he could also speak about 1998, 1934, 1921 as the warmest U.S. (where they have the best record) years in the 20th century, the hockey stick graph, the crucial role of the huge heat capacity of the oceans, the little ice age whose cause is unknown, and about the increase of "bulk" Greenland ice in the last century (by 2 meters at the center). Another panelist conjectured that this increase of ice was due to precipitation.

Giaever mentioned that it takes years to regain the energy that was needed to produce a solar panel; the precise number became a topic of a controversy. There is 500 years worth of coal in the U.S. He also warned that ice ages do happen and we might be just waiting for one (54:30). The temperature decrease could be 8 °C so maybe they should pollute more than they do! ;-) (The moderator argued that we can calculate there won't be an ice age for 40,000 years, a statement I can't confirm.)

And by the way, if people really cared about this problem, why don't they talk about one solution that we already have, namely nuclear energy?

And finally, we don't know what is the correct temperature. It could be 2 °C warmer or colder. I don't know but what I do know is that this is not the correct temperature. In the question period, he said that the chance the the warming is anthropogenic is not very large: it might be but it doesn't have to. In the question period, he was also asked whether it was a good idea to establish more efficient schemes of transportation of energy. Despite attempts to humiliate him, he sensibly insisted that it was only up to 10% of the energy which was a very small, unimportant number.

Entertainingly enough, his moral record was clear because, as he said, Norway only produces clean energy! Well, Norway is not quite perfect. In his very final contribution, he hated to say something bad about Norway but he sharply disagrees with his country that has allowed Al Gore to pick a peace Nobel prize (applause!). 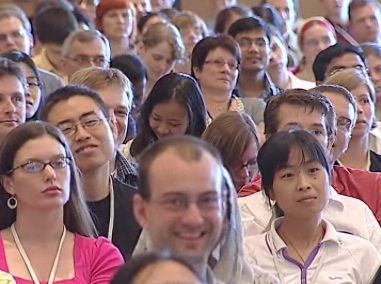 The audience was chuckling throughout his contributions as if they were looking at the most entertaining heretic in their life. ;-) In the middle of the meeting, Giaever continued that he was not supporting pollution but even if climate change were man-made, we can't stop the usage of fossil fuels because the Chinese want to live in the same way as we do. And he doesn't see any results of the climate regulation efforts during the first decade when it was already supposed to materialize in Europe.

You may also read a new report about a happy meeting of some young Lindau participants with Ivar Giaever.

As the video and Seed's websites reveal, many other statements at the meeting would be inconvenient for the high-school dropouts, too.

Hartmut Michel (Germany), a biochemist and the 1988 chemistry Nobel prize winner for crystallization of membrane proteins, urged the world to stop the biofuels immediately: the audience applauded to him. Biomass only captures 0.7-0.8% of the solar radiation, for biofuels it is 0.2%, and it would be much better to wait for good enough solar panels with 15% efficiency. Also, the biofuel technology leads to food shortages and the logging of rain forests. You shouldn't be suprised that Hartmut Michel was irritated when Ivar Giaever called the solar panels "unproductive" but as you can see, none of them would agree with the environmentalist "consensus". :-)

Some speakers, namely Douglas Osheroff (superfluidity of Helium 3, Nobel for physics in 1996, a Bush hater), wanted to blame politicians for the bad idea of biofuels. I find it hypocritical. The biofuels were pushed because some scientists close to Osheroff have been repeating nonsense about bad "non-renewable" sources of energy. So biofuels are naturally better than crude oil because they are renewable. People like Osheroff never promoted a fully rational, scientific debate about these things and results such as inefficient biofuels are exactly what you should expect from such a mixture of inaccurate science and ideological slogans. It is simply bad that Osheroff et al. try to get rid of the responsibility.

Not surprisingly, Carlo Rubbia (Italy), the 1984 winner of the physics Nobel prize for the experimental discovery of the W and Z bosons at CERN, promoted (although not enthusiastically) nuclear energy (and also solar energy). See his proposal to replace uranium by thorium - a text that uses some of the CO2-concerned language. He also said that the Earth is going through an extraordinary process today: every decade, the number of people gets multiplied [sic] by 1 billion! :-)

Well, I am afraid that if Rubbia's obvious mistake is fixed, the current era becomes pretty ordinary. Nevertheless, Rubbia says that it should "become impossible to say that we should continue with the business as usual" because the population is increasing [just like it has done for millenia]. Among the participants, Rubbia clearly turned out to be the ultimate hardcore, nearly Hansen-level alarmist. Rubbia (*1934) also thinks that he is not old! :-)

Nuclear waste was not discussed at all but nuclear weapons were mentioned as a dangerous by-product of the nuclear power plants: thorium doesn't allow for bombs. Moreover, 1 ton of thorium gives the same energy as 200 tons of uranium. There's so much of it that it makes no sense to call it "nonrenewable".

Concerning climate change, Klaus von Klitzing (Germany), the only 1985 physics Nobel prize winner for his discovery of the quantized Hall effect, argued that more research was needed. People have already changed the world in many ways and we simply do not know whether tripling of CO2 leads to any kind of instability. Moreover, he emphasized that the increasing population inevitably leads to increasing consumption of energy - the "energy problem" that is primary - and climate change is just a result and we clearly have to live with that. Thermonuclear fusion in a near future is unlikely and time constraints are essential. Sometimes, the government (EU) funding of energy research (solar etc.) is higher than necessary.

Once again, von Klitzing and Giaever were certainly not the only ones whose skeptical inclinations couldn't be hidden. Even among the signatories of the pro-rational, anti-environmentalist 1992 Heidelberg Appeal, you find three members of the Lindau climate panel. Johann Deisenhofer, who won the 1988 chemistry prize with Michel and Huber as well, has signed it, too. As far as I can say, he tried not to say anything controversial at all. As a result, he didn't say anything I would find worth reporting.

Jack Steinberger, the 1988 physics Nobel prize winner for the discovery of muon neutrinos, argued that it was pointless to wait for thermonuclear fusion because Edward Teller already promised him the new source 53 years ago. It won't be ready in a foreseeable future. At the very end, someone asked what the scientists can do for politicians to follow their recommendations. Steinberger honestly said that the panel revealed disagreement between the scientists so what the politicians should "hear" is not obvious.

If you summarize the comments, 3/7 of the panelists could be classified either as downright skeptics (Giaever) or cryptoskeptics, the fourth one (Michel) radically hates biofuels, and the fifth one (Steinberger) thinks that there is a significant disagreement in the science community. The remaining two, Osheroff and Rubbia, could be honestly counted as supporters of the "consensus".

The percentage of supporters of the "consensus" among the scientific Nobel prize winners is low and it would be even lower if the organizers were not afraid to ask more skeptics to participate and if these skeptics were not afraid that it will be an annoying experience for them.

The moderator and organizer, Hans Joachim Schellnhuber who is a local director and a member of the Inquisition Promoting Climate Change (IPCC) who boasted that he met James Hansen a week ago (this guy try to "look important" all the time even though he is only a puppet in an inferior scientific discipline: I am somewhat allergic to similar individuals), obtained a similar number. So when a student asked whether the Nobel prize winners thought that men were behind climate change, he said that "there is a 60% probability that man is seriously behind climate change" and it is a problem that should be wrestled with.

However, Schellnhuber also used Pascal's Wager. If you think that there is a 60% probability that there won't be a crash, you won't enter the aircraft. ;-) Well, that's a good joke but not what I would call a rational conclusion of a complex panel debate.
Luboš Motl v 11:15 AM
Share