The Sun seen to repeat the Dalton minimum

of the length of various solar cycles seems to indicate that right now, at the end of the (very long, perhaps 13.6 years, it's not yet really over) solar cycle 23, we seem to be in a similar situation as we were after the long solar cycle 4 (13.6 years). Both of them were preceded by very short cycles (SC3: 9.2 years, SC22: 9.6 years).

The following solar cycle 5 at the beginning of the 19th century could therefore be mimicked by the imminent solar cycle 24. It had an anomalously long period of rise (6.9 years) and a short period of decline (5.4). Usually it is the other way around (4 years vs 7 years in average). The solar cycle 5 was the first half of the Dalton minimum (1800-1825 plus a decade before and five years after these two cycles) that was correlated with (and maybe brought) a period a cooling. 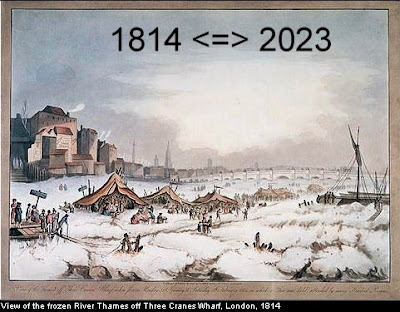