This is the very latest graph showing the top-quark mass (x-axis) and the W-boson mass (y-axis). The blue ellipse comes from the Fermilab: 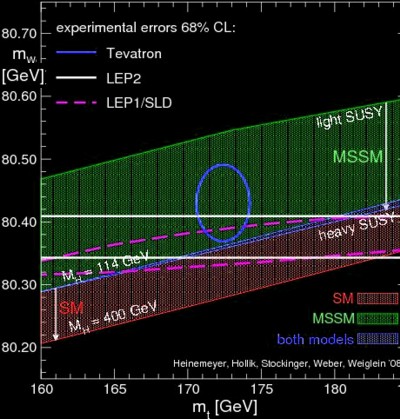 You see that LEP I (CERN) and LEP II/SLD (CERN and SLAC) were undecided but the Tevatron (FNAL) seems to prefer supersymmetry: the blue Fermilab ellipse (68% confidence level) sits inside the green (MSSM) strip. That's surely not a reason to be 100% confident but it might be a hint. ;-)

Note that it is primarily the W mass that determines the expected Higgs mass and with the known data, the Higgs looks extremely light. The central value is below 100 GeV and at the 95% confidence level, the God particle sits below 154 GeV. When the direct searches are included in the calculation, the 1-sigma interval for the Higgs mass is 115-135 GeV. LEP could have discovered it if they could stop it later than they did.

95% percent of the Tevatron data are still waiting and it is expected that the precision of the W-mass (and other things) will be improved by a factor of three once all the data are processed. To make it clearer for some readers, using 20 times more data doesn't change their qualitative character: it only increases the accuracy by "reducing the noise", if you wish.


Incidentally, today, D0 at the Fermilab announced - in a press release - the discovery of three ZZ events extracted from 200 trillion events. ZZ events are very rare and somewhat similar to processes including a Higgs boson.