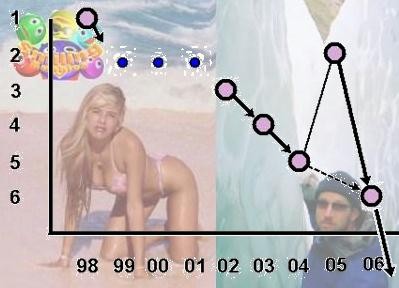 If I were as manipulative (or stupid) as Al Gore, I would also build on the fact that three of the four months in this century with a negative temperature anomaly occurred in 2008 (July 2004; January, May, June 2008).

But this statement is not so surprising for sensible people because the temperature is a continuous (although not smooth) function of time and nearby months should be expected to have similar temperatures. Once we know that May 2008 was the coldest month, it shouldn't shock you that you will find nearby months in the hit parade, too.

In terms of the anomaly, the land in the Southern polar lands - Antarctica - cooled by a hefty 2.35 °C from the previous month - from +0.82 to -1.53 °C. Such things happen near the poles where all changes are amplified and where the area is not too large to guarantee a constancy of temperature.

The Northern polar region cooled from 1.03 to 0.49 °C between May and June 2008. The total sea ice anomaly is currently near zero, as a positive anomaly of the Southern Hemisphere cancels the negative anomaly of the Northern Hemisphere. A year ago, the total anomaly was around -2 million squared kilometers. Those "experts" who bet that there will be less ice in 2008 than 2007 don't look particularly clever to me. ;-)

By the way, a Dutch team just published a study that shows that the Greenland melting cycle exhibits no trend in the last 17 years. See Andrew Revkin's blog and NYT article.

This absence of warming becomes even more striking in the middle troposphere where the bulk of the greenhouse effect is being predicted while the reality shows an even slower warming trend if any. In fact, the trend since 1979 is 0.00 °C per decade on the Southern Hemisphere and 0.05 °C per decade globally, justifying the claim that there exists no satellite-observed global warming in the mid troposphere.

La Nina and the Sun

The La Nina conditions have changed to ENSO-neutral conditions that are expected to last at least through the Fall 2008 which should remove the negative ENSO bias: we will see whether we will return to "hot" temperatures.

The Sun remains sunspot-free and quiet which could keep the Earth rather cool.