Information loss occurs to all orders of perturbation theory 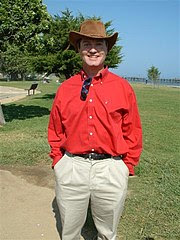 Iizuka, Okuda, and Polchinski have confirmed something I always believed to be the case.

Hawking has shown that the information is lost in the semiclassical approximation. We know that in the full exact theory, it is preserved. But is the information lost at higher orders of the perturbative expansion?

The three authors use a matrix model to argue that the answer is almost certainly Yes, it is lost. It is a natural answer because the higher orders still respect the classical causal structure which is enough to kill the information. Another qualitative way to see the same conclusion is to notice that the phenomena that get the information outside are a form of tunneling which is a non-perturbative effect.

Their matrix model can be shown to have a discrete spectrum and to preserve the information. Nevertheless, at each order in the 1/N expansion - probably analogous to the expansion of a bulk theory in powers of Newton's constant - the information is lost and the spectrum is continuous.

The subtle difference between these two answers occurs because the long-time limit (needed to see whether the information is gone at the very end) and the large-N limit (needed to create a large black hole that may be treated by perturbative general relativity) don't commute with each other.
Luboš Motl v 7:46 AM
Share