Moscow: DiCaprio is a Lenin clone

Prominent filmmakers in Moscow (backup I, II) have determined that Leonardo DiCaprio would be ideal to play Russian revolutionary Vladimir Lenin. 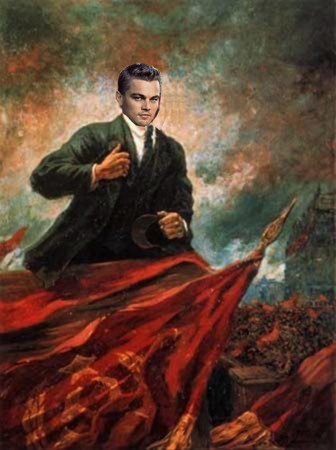 His similarity to young Lenin is striking: he could play the role without make-up. He has Slavic features (DiCaprio's mother's dynasty lived in Russia) and the same expression as Lenin. These Slavic features have already helped DiCaprio to represent your humble correspondent in the String Kings.

In the planned movie currently called Lenin's Brain, a clone of Lenin sparks a socialist revolution in the United States of America in 2004.


It hasn't yet been announced whether the revolution, inspired by the ideas of Marx Gore and Hansen Engels, starts on the 11th month, as one involving the original Lenin, or on the 11th hour, as DiCaprio's previous movie. But be sure that the science-fiction comedy will occur in a 11-dimensional spacetime, much like the String Kings. ;-)