The upper house of the Russian Parliament (Council of Federation) has voted unanimously (130-0) to ask President Medvedev to recognize Abkhazia and South Ossetia as independent countries. By the rules of statistics, it could have been expected that the lower house (Duma) would do the same thing soon: it voted unanimously (447-0) a few hours later. 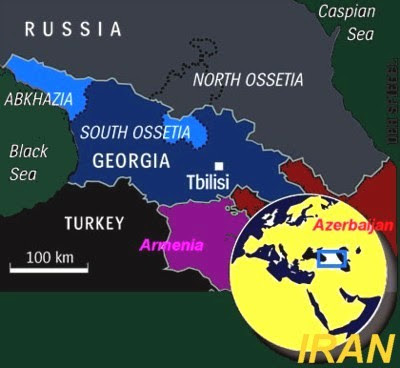 Medvedev will have to think twice. The recognition of their independence would mean a change of their policy: they opposed the independence of Kosovo. But because the world, including Russia, is slowly accepting that Kosovo has become an independent country, the situation has changed.

I would find it natural (and more stable) for Russia to recognize the independence, organize a speedy referendum, and attach those provinces to the Russian Federation. At least that's what I would be doing as the boss of the Kremlin. A re-unification is particularly natural for Ossetia.


As everyone who understands politics a bit has always known, the Kosovo independence has sparked a natural avalanche of declarations of independence. Czech president Václav Klaus emphasized the role of Kosovo as a precedent from the very beginning. Russia Today has predicted South Ossetia and Abkhazia as the first places to follow Kosovo's example as early as February.

In this now-natural process, I would expect Nagorno-Karabakh to be the next de facto independent country that might be recognized, because of their geographic proximity to the current main epicenter of events. Azerbaijan is already talking about it: its officials are now scared like hell. I believe that the independence of Nagorno-Karabakh - or its unification with Armenia - is a good thing for Moscow because Armenia is friendlier to Russia than Azerbaijan and they might want to recognize their separation from Azerbaijan, too. (The topology of Armenia is already nontrivial.)

Crimea (now in Ukraine) could follow: there are historical reasons to understand why it should belong to Russia and the status of Sevastopol may turn out to be ambiguous even from the current legal viewpoint. Transnistria is a de facto independent, pro-Russian strip that belongs to Moldova de iure and Moscow may want to bring it closer, too: the Russians are already intensifying diplomatic turbulence in Transnistria.

It is unlikely that too many other countries would join Russia in accepting the independence of Abkhazia and/or South Ossetia. On the other hand, I find this question pretty much inconsequential because Russia is who ultimately enforces the status quo in the region, much like NATO is doing the same thing on the territory of Yugoslavia.

At this moment, I would consider pure idiocy if NATO were trying to rearm Saakashvili because this guy will obviously lose any hypothetical future conflict with Russia, with a possible (but not guaranteed) exception of a full-scale world war. By his adventures, Saakashvili has already wasted USD 2 billion in the conflict (more than 1 month of his country's GDP) but only a very stupid person could repeat a similar mistake again. (Russia has adopted the usual American nuclear doctrine, the right for preemptive nuclear strikes, half a year ago, and the fear of nuclear weapons has dropped dramatically since the 1980s, so we should better be careful.)

NATO should stop provoking Russia in this obvious fashion and accept that Georgia continues to be a Russian backyard, a status it has enjoyed for centuries, much like e.g. South America is the U.S. backyard closed from the European powers, according to the 1823 Monroe doctrine. NATO needs Russia for many projects, including logistics for the war in Afghanistan. Cutting links with Russia could mean a defeat in Afghanistan, among many other things; Russia wouldn't care, it's ready to break all the ties. Meanwhile, Iran can do whatever it can because people are looking elsewhere. Moreover, Russia is being pushed closer to Iran which is bad.

In the U.S., it is apparently an example of bipartisan political correctness to be against Russia, and to assume that the U.S. can do anything in the Russian sphere of influence. This silly consensus is, of course, primarily created by the manipulative, dishonest media, and hundreds of millions of stupid people who uncritically believe what they read. They may be shocked by reality. And indeed, they should be. ;-)
Luboš Motl v 11:33 AM
Share