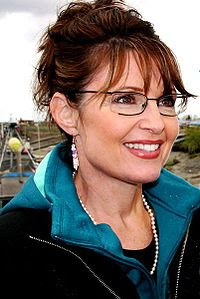 Sarah Palin (44), the governor of Alaska, and her life surely look fascinating and she will probably make McCain's GOP ticket much stronger (and certainly much younger! McCain is 72 today). She is a former beauty queen, ex-mayor, former sports reporter, hunter, shooter, fisher, wife of an Eskimo, pro-life feminist, mother of five, including a bundle of joy with XX+21.

But she's a great character.

There are all kinds of interesting things about her but because climate and energy policies are among the standard topics on this blog, I chose the video above. In this June 2008 Glenn Beck show, she talks about her lawsuit against the U.S. government that wanted to use the "endangered" polar bears as hostages to cripple her, Alaskan economy and to prevent them from tapping the resources, because of some unreliable climate models, as she calls them. She appears at 4:30, after an entertaining anti-environmentalist rant by Glenn Beck.

She has also serious doubts about Darwin's biology but I feel that alarmism is more serious a threat to the humanity these days than creationism. In the interview linked above, she answers the following to the last question about the impact of climate change on America and Alaska:

A changing environment will affect Alaska more than any other state, because of our location. I'm not one though who would attribute it to being man-made.

If you're in the process of launching your own site dedicated to
global warming skeptics, Sarah Palin, or both, you'll need to find affordable website hosting. You need look no further.
Luboš Motl v 8:00 AM
Share