Well, my general feeling about this type of phenomenology is that the amount of work needed to draw similar conclusions is so low and the uncertainty about the relevance of different types of dark matter particles and interactions is so high that it would be a better policy not to talk about similar speculative effects in detail until there is some actual evidence - observational or theoretical - that dark matter should "work" in one way or another.


The amount of "coolness" or "importance" of such results seems to be a strictly decreasing function of their likelihood which makes me ask "What's the point?". And even if some phenomenologists study models that turn out to be (partly) valid, it can be seen that they were just lucky. Moreover, their paper won't become really "impressive" even if the model is validated because the amount of both hard reasoning and far-reaching qualitative consequences was low regardless of the validity of the model.

Shouldn't we try to quantify new effects only when there are at least qualitative reasons to consider them in the first place? 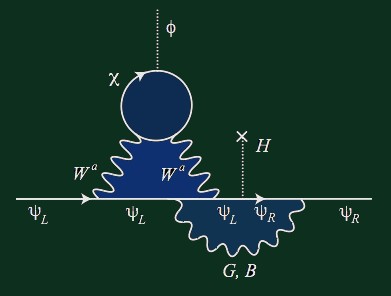 But Sean also says something about the theoretical background of their work - something that reveals his amusing misunderstanding of the meaning of 1PI (one-particle-irreducible) graphs in quantum field theory. More concretely, he claims that it is hard for dark matter to influence the interactions between a new (non-Higgs) scalar field and fermionic matter of the Standard Model.

To clarify his opinion, he draws the three-loop diagram above, claiming that it is the first diagram that contributes. You probably don't care about dark-matter contributions to some particular not-the-most-natural interactions of leptons and quarks with some new scalar fields that are not yet observed (or even substantiated) themselves but imagine that you do. How complicated diagram you have to draw?

Why is this question emotionally loaded? Well, Feynman designed his Feynman diagrams that can be arbitrarily complicated. But in reality, only the simple ones are really important in most cases. Complicated diagrams with many loops correspond to small corrections and there's not much reason to talk about them if there exist larger terms: the larger terms i.e. the simple diagrams decide about the qualitative behavior.

The simple diagrams are also much simpler to calculate which are two main reasons why most particle physicists have never fully calculated any 3-loop diagram or higher and the percentage is close to 50% for 2-loop diagrams. The convoluted diagrams are suppressed by powers of a small number "g" and the number of people who calculate them is suppressed in a similar way. ;-)

Whenever someone claims that an effect only occurs at the L-loop level (and not a lower level), it is always an intriguing claim because it suggests that an unexpected cancellation takes place. It shows that one actually has to do some abstract math - more abstract than previously thought - to understand an effect, even qualitatively. But is it true that it only occurs at the L-loop level?

In this particular case, you need the "chi" (dark particle) blue loop at the top - by assumption: you study dark matter contributions. You also need the other blue loop surrounded by the "W_0" propagators because the dark matter only interacts with the conventional matter through the electroweak interactions. You also need the "H" tadpole (the vertical propagator ending nowhere) to switch the chirality of the horizontal fermion because Sean et al. also want to study a very special type of terms here, the left-right interactions only. Note that there are so many propagators here only because Sean et al. chose to ask a very contrived and probably not too important question.

But do they need the third loop, enclosed by the "G,B" propagator? Sean says:

...But you can’t have the Higgs insertion sitting all by its lonesome on an external leg, or you don’t get a one-particle irreducible diagram. So you need one other gauge loop, either SU(2) or color SU(3), connecting the left-handed and right-handed fermions around the Higgs...

This reasoning is, however, incorrect. Where is the mistake exactly located? Well, the mistake is in the word "So" that I wrote in bold face. ;-) If a simple diagram fails to be 1PI, it actually doesn't mean that you need a more complicated diagram!

A one-particle irreducible (1PI) diagram is a diagram that "holds together" in the following sense: you can't possibly split it into two parts by cutting one internal line according to your choice. This concept is very useful because the full physical result can be written as the sum of the 1PI diagrams and other, non-1PI diagrams that can be written as conglomerates of 1PI diagrams.

But the point here is that the 1PI diagrams are useful: they are "elementary letters", in a sense. Sean thinks that they are the only ones that appear in the physical answer which is just wrong. So the correct minimal diagrams contributing to the quantity he wants is not the 3-loop diagram above but the simpler 2-loop diagram where the "G,B" wiggly line at the bottom of the picture is erased. Yes, this diagram is not 1PI but it still contributes to the physical result. Indeed, this contribution factorizes in a way but if something factorizes, it doesn't mean that it doesn't exist.

So you need two loops, not three loops, to get the desired interaction. One is needed because you want to study dark matter loops ;-) and the other is needed because you assume that the dark matter only interacts via the electroweak interactions. In other words, you get exactly as many loops as you expect. There is no surprise or an interesting result going on here and whoever claims otherwise is only emitting a nonsensical bubble of hot air.

You might want to look at the contributions to the phi-psiL-psiR coupling that are inherently different, not proportional to contributions to the phi-psiL-psiL coupling and then the differences would require you to start at the 3-loop graphs, indeed. But that's not the task that Sean outlined, so his answers to his problem are wrong. At any rate, there is no surprising or anomalously high number of loops anywhere here.
Luboš Motl v 3:52 PM
Share