In my opinion, the best hep-th paper this week was

Even the PC people should be happy about the paper because most authors are female. ;-) (Well, except that the PC folks also dislike Russians like NS or conservatives like JM, but let me already stop here.)

They find out that the recent F-theory picture by Beasley, Heckman, Vafa (I, II) naturally realizes the "ultimate compromise" scenario for supersymmetry breaking, the sweet spot supersymmetry breaking by Ibe and Kitano (phenomenologists who may have actually predicted a real consequence of physics i.e. string theory!) that we discussed in 2007.


In this model, all dimensionless couplings are of order one while a scale, X, is around 10^{12} GeV and is claimed to be instanton-generated in the F-theory picture as explained by another paper from this week. The gravitino mass is around 1 GeV and dozens of canonical problems such as the mu-problem are solved (or marginally solved, if you want to be more skeptical). 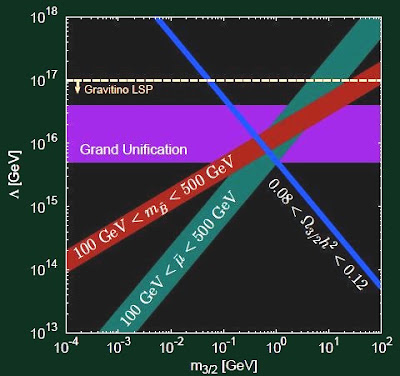 IQ test: where do you think the sweet spot is on the picture?

F-theory is a natural picture where you would expect dimensionless parameters to be fully determined by known dynamics (the string coupling is geometrized and its self-dual value, around one, is special because of S-duality that is manifest) and this paper is an example of this principle at work.

Be sure that right now, because of the latest experimental data, I consider SUSY's existence to be "somewhat more likely than not" and the sweet spot is a rather natural place at the heart of the SUSY-breaking parameter space. So if I had to make a bet not only about the presence of SUSY ;-) but also about the gravitino mass, I would bet something close to 1 GeV, indeed. For the same (and related) reasons, I consider split SUSY breaking highly contrived.

This may be an exciting development and all SUSY theorists should look at the papers, learn some extra phenomenology and/or F(ather)-theory that are needed in this "interdisciplinary" enterprise, and arrive at their own conclusions. I call this research direction "interdisciplinary" because F-theorists have traditionally been among the most mathematically and abstractly oriented string theorists while SUSY breaking is one of the dirtiest subdisciplines of particle phenomenology.

If the work is correct, SUSY breaking is not as dirty as we previously thought while F-theory is not as detached from the hard collider data as we used to think, either. Susie may love her sweet spot, much like jam-addicts Linda and Maleika do, as Natalia and Sakura say (sorry, Joe, there was no room for you here!). ;-)
Luboš Motl v 8:47 PM
Share