Update: They have given up...

This story is very funny and similar to the adventures of Bancroft and Arnesen that we discussed a year ago.

Sam Branson, son of Sir Richard Branson, is sending his travel log to Mirror.co.uk. Sam, Robbie, and Lewis Gordon Pugh (the main hero, the world's #1 cold-water swimmer) decided to prove man-made global warming by a trip from Spitsbergen to the place with the most devastating heat wave - the North Pole. ;-)

From reliable sources in the media, they also learned that there won't be any ice in the Arctic this summer! ;-) So they simply went there with a few kayaks, to have some fun. Lewis is supposed to kayak to the North Pole (!) while others belong to his support team. ;-)

Of course, as you can imagine, the Arctic diary in Mirror.co.uk is already pretty funny or scary, depending on your viewpoint, describing how the temperature dropped "dramatically", the frostbite may be coming to Robbie's toes, and general desperation of the participants is expanding.


Moreover, Lewis returned and said that he couldn't feel his backside. To make things even worse, they encountered 88 polar bears along the way. :-) Lewis wrote:

My split feelings about this news remind me of another paradox of my expedition up here - the fact that I am spending my days padding in ice-cold water, with a frozen, painful backside, trying to bring to the attention of the world and its leaders the necessity of stopping the world heating up.

But if you want to see an even more drastic black humor, read the newest report from Lewis:

"We're stuck." (Map.) I have slept poorly. The floating ice, while thin, is so prevalent [...] The sea is almost entirely congested with ice floes - I would estimate 80% plus of the sea is covered by them. There is a real risk that we could get stuck up here. [...]

Of course, The Reference Frame wishes them a pleasant weather for the 1,000 km (90% of the trip) remaining to the North Pole, a safe trip back to their homes, and a successful brain transplantation afterwords. 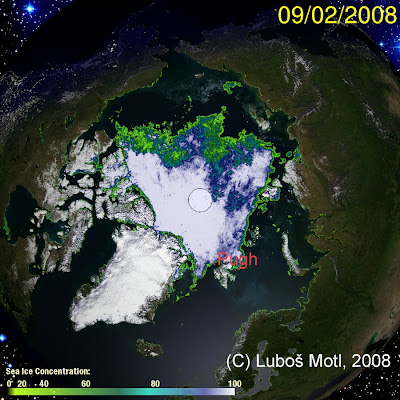 More seriously, look at the most recent (yesterday's) picture of the situation from The Cryosphere Today: click to zoom in. The red dot on the left side from the word "Pugh" is their current location. As you can see, they just got to the very beginning of the Arctic ice.

I am afraid that they didn't tell poor Lewis that there is ice over there and they didn't show him any maps like this one. And they didn't tell him that the sea ice area normally increases since the bottom at the beginning of September (and it is able to increase very quickly, see the Java animation from the last 30 days). Would you bet that Lewis Pugh will get to the North Pole with his kayak? ;-) I would think that it was easier for Jeremy Clarkson to get there with his Toyota pick-up truck.