AP informs that the amount of carbon dioxide produced by the civilization grew by 3 percent between 2006 and 2007, mainly thanks to developing countries. See Google News for more.

The approximate figure 3% shouldn't be so shocking given the fact that the world's GDP growth was about 4% and the GDP and CO2 production are intimately linked, except for some increases in efficiency that remain subleading. And they will remain almost negligible unless a completely new technology becomes economically more acceptable than those based on the combustion of fossil fuels, fermentation, alcohol production, animal agriculture, and cement manufacturing.

Analogously, the U.S. CO2 production increased by 2%, agreeing with the estimate based on the GDP growth, too. China defended its new status of the #1 producer of CO2, leaving the U.S. its #2 spot while Russia's #3 position is threatened by India.


If the output kept on increasing geometrically by the same rate as in 2007, which I expect to be exaggerated, the world's CO2 output would double every 23 years. But the people who think that the CO2 output may decrease by 50 or 80 percent even if no breakthrough involving non-carbon technologies emerges are living in a different multiverse. That includes the skittish IPCC pundits whose prediction in AR4 of a stagnant-or-decreasing CO2 output has been brutally falsified by the data. Consensus is obviously not sufficient to make sensible predictions.

Without a revolution in these technologies, which is a hypothetical event you can never be sure about and you can never order, a drop of CO2 output by 50 percent in a few decades would be equivalent to bombing us back to the Stone Age.

As Gene says, the benefits of those 3 percent of CO2 are huge. But what do they do with the Earth's temperature?

When you consider the warming effect, there is another deceleration. Whatever the climate sensitivity is, the effect of CO2 is logarithmic. So the CO2-induced warming rate will decelerate even if the man-made human CO2 output grows exponentially with a rate similar to the current one. The CO2 concentrations would have to increase exponentially for the CO2-induced warming to increase linearly: that's because the exponential and logarithmic functions are inverse to one another.

Sane people should realize that unless new revolutionary technologies are found to replace the carbon-based ones (which cannot be guaranteed by any law or wishful thinking), it is impossible to substantially change the CO2 output and pretty much all "cheap" fossil fuels will eventually be used, leading to the same net total warming (whatever its exact size is: 0.5 °C or 2 °C from all the remaining fossil fuels). Because the future generations will have more viable alternatives than we do, it is more meaningful to use the existing fossil fuels sooner rather than later. 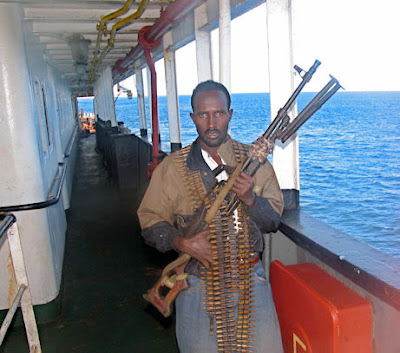 Incidentally, you may have seen the graphs proving that global warming reduces the number of pirates. However, today, pirates have seized a Ukrainian ship with dozens of post-Soviet people and 33 Ukrainian tanks - see Russia Today and Voice of America - so the global warming is obviously not as strong as some people have argued. ;-)

A Russian battleship was sent to Kenya to fight against the insufficient magnitude (or absence) of global warming. Meanwhile, an American ship is trying to help the Slavs and looks at the pirates. These friendly Africans demand a USD 35 million ransom. ;-)
Luboš Motl v 10:36 AM
Share