In this weekly dose of peer-reviewed skeptical climatological literature, we visit Springer's Climatic Change where Craig Loehle has the following article:

A mathematical analysis of the divergence problem in dendroclimatology (abstract, preview of page 1) 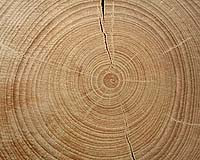 He shows that the tree ring proxies can completely mislead you. Even if you have reasons to believe that the tree ring width primarily depends on the temperature, there is one subtlety that can literally turn your results upside down: nonlinearity.

In his previous papers, Loehle has presented evidence that in fixed conditions (and moisture), the growth rate is bounded from above for a given species. Under normal circumstances, the growth rate increases with temperature. How is it possible that it is bounded? Well, it may (schematically) behave either as
In the first case, the rate asymptotically approaches a given value. The second scenario may be even more realistic: the growth rate can actually be maximized for an optimum temperature and then it can decrease again. If you want to extract the temperature from the rate, you have to solve a quadratic equation that is famous for having two solutions. ;-) 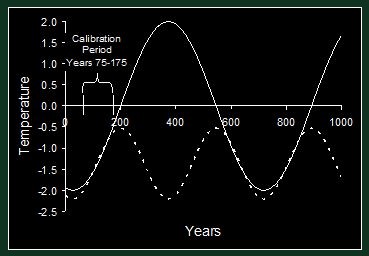 Consequently, it is easy to incorrectly pick the other root of the quadratic equation that has the effect of flipping pieces of the graph upside down. So it's actually easy to get a medieval cool period instead of the correct medieval warm period if you're not careful enough: this wrong result may be hard to discover because all the statistical tests may be extremely encouraging.


The R^2 coefficient measuring the correlation in a test period may be as high as 0.99 (for example, on the picture above); nevertheless, the qualitative conclusions outside this interval can be completely wrong (in the picture, the upper solid line between the years 200 and 600 is the right one but you get the lower, dashed line instead). Loehle also proposes possible tricks to deal with this problem, including truncation.

There are of course many other difficulties that may complicate the reconstructions based on tree rings but that doesn't mean that you should forget about this one. If you are impressed by the nonlinearity argument, you should take Loehle's previous reconstruction a bit more seriously because it avoided all tree rings. See also Loehle vs Schmidt.
Luboš Motl v 7:00 PM
Share