Eurobarometer: Czechs have the smartest attitude to climate change

Eurobarometer has released its latest poll,

If you go to page 7 ("9 of 145" in the PDF file), you will see the percentages "how many people in each country view climate change as a serious problem". The results are sorted from the sanest countries to the dumbest ones in this respect: 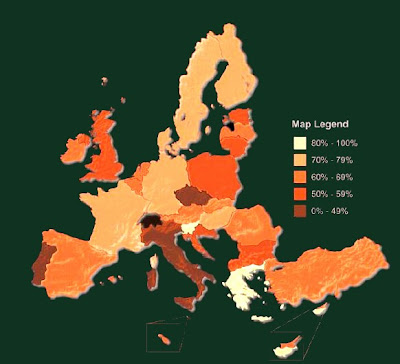 You see that the differences are substantial and the numbers seem to be largely uncorrelated with the latitude and GDP per capita. But it's arguably scary that only 3 EU members seem to be dominated by climate skeptics.


Meanwhile, Sarah Palin is slowly flip-flopping on climate change which is an extremely bad idea, not only because she is rightfully criticized for flip-flopping. As far as the support from the voters goes, there was clearly nothing wrong with her skepticism.
Luboš Motl v 10:39 AM
Share