In today's edition of Questions from Mr Václav Moravec, a political weekly on the main public TV channel (ČT1), there have been three interesting guests.

First, Mikhail Saakashvilli, the president of Georgia, showed that he has been trained to be likable on TV. What he said (in English, translated to Czech) about his innocence and the evil plans of current Russia didn't make much sense if you think about it carefully but his answers were optimized from a P.R. viewpoint for those Czech spectators who don't think much. Good job.

Second, maverick deputy Vlastimil Tlustý talked about the blackmail case that will be the main focus of this text.

Third, Mr Martin Bursík answered a few questions. He is a typical opportunist politician but in this particular job, he is a true professional. During the weekend, he has been re-elected the chairman of the Green Party, thus eliminating his left-wing foes from the leadership of the party.

His party probably remains the only Green Party in the world that doesn't consider itself to be a left-wing party - and, more importantly, it is actually not a left-wing party. Well, Bursík himself is not "inherently" green. He just found the Green Party to be a suitable platform for a good career. I never vote for similar politicians but I must say that I understand that some people choose this kind of politicians and he's simply good at it.

Mr Vlastimil Tlustý, a maverick deputy for the governing right-wing Civic Democratic Party ("ODS": founded by Václav Klaus in the early 1990s), was explaining the blackmail case. Well, it's more a game about blackmailing than real blackmailing itself. The most funny thing is that everyone may actually be innocent in this bizarre game. What happened?

I will assume that Tlustý's story is authentic because it makes perfect sense and I see no good reason to doubt what he says.

At the beginning of 2008, a journalist from the commercial TV NOVA, Mr Janek Kroupa, was trying to find out who was collecting compromising materials against politicians (if anyone). To find the answer, he had to hire an appropriate shill. Clearly, it had to be someone who could be interesting for the people who collect these materials. It's not really too surprising that he eventually decided that Mr Vlastimil Tlustý was a perfect shill.

At any rate, the rest of the Civic Democratic Party (and maybe others) might have wanted to find something bad about Tlustý, and because there were rumors e.g. that he broke the bed ;-) with his 24-year-old lover (I can neither confirm nor disprove!), a sexually sensitive scene was a great choice for Mr Janek Kroupa, the investigative journalist.

So Tlustý was a passive player who has been photographed with a new attractive young lady in the swimming pool and elsewhere. They were surely not excessively dressed - less than on the picture below. ;-) 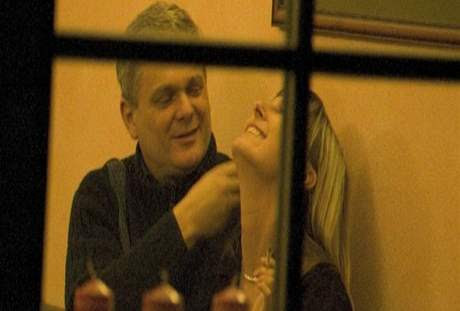 Great. So now they had some pictures of Tlustý with an attractive young woman. What can you do with them? (Incidentally, these stories never hurt Czech politicians because most Czechs have a lot of understanding - and, indeed, respect - for such extramarital adventures.) Some people have suggested that Tlustý himself was offering these compromising materials against himself to his colleagues in the Parliament.

I completely agree with Tlustý that this scenario sounds completely insane. Why would he be doing it? Tlustý would be silly to offer these photographs "seriously" and every potential "collector" would have to be a complete moron if he believed that Tlustý was offering the photographs against himself "seriously". ;-)

At any rate, it turned out that a young deputy for the Civic Democratic Party, a guy called Mr Jan Morava, was interested in these photographs (and obtained them, probably from someone else). He's been also trying to find some compromising materials against Ms Olga Zubová, a Green Party deputy who often voted against the government, too (and against her daughter).

Recall that the Czech Green Party is a centrist party that belongs to the governing coalition but some green people, such as Zubová, are not thrilled to be supporters of a right-wing government. Morava's behavior looked completely childish, naive, and morally unacceptable. He will almost certainly resign tomorrow.

So is Morava a part of the mafia that tries to collect compromising materials against politicians? It may be so but I actually think that it is unlikely. Morava himself has another explanation: he was trying to find out the bad people from the "mafia" who actually offer these sensitive materials. ;-) And I tend to believe that his explanation is honest, too.

I think that Tlustý is completely innocent. I feel it is perfectly OK to be a shill in a similar investigation. Such a shill had to be a politician and similar shills may often help to do useful things. The prime minister himself is proudly using shills in his search for corruption and other things.

Yes, being a shill (and having fun with young women in the swimming pool) is not what most of the deputies are voted for. But there is hopefully no universal law what criteria the voters should be actually using when they are choosing their representatives. And I personally have a lot of understanding for Tlustý's cooperation with the journalist who was trying to find the bad guys. Clearly, many people may disagree, but I think it is great if playful people like Tlustý are members of the Parliament. Raising their hands is not the only thing I expect from good deputies, at least not from all of them.

Unless his comments are completely untrue, I think that Tlustý is completely innocent, both from legal and moral viewpoints, and he shouldn't resign.

Whether Morava is innocent is a different story. He may have been caught into a game that was too complicated for this naive guy. He may co-operate with some dark forces, too. But if the latter scenario is correct, then it is likely that some senior politicians are participating in these sick methods, too.

The chairman of the Civic Democratic club in the Parliament - Mr Petr Tluchoř - is among those who could have been "explicitly" grateful to Mr Morava for finding sensitive materials against inconvenient politicians (Tluchoř may have even asked about the price of a "package" of similar photographs) - a sentiment that may have motivated Morava.

If that's the case, then I completely agree with Tlustý that while Tlustý is innocent, Tluchoř should resign simply because Tluchoř may have co-operated in blackmailing which is not only a "bad thing" but it may also be a crime. On the other hand, being photographed with young women is not a crime. I think that our decisions about the people who deserve to be "sacrificed" should be based on the actual law (and perhaps some morally "stronger" versions of it). If the bills are wrong, they should be fixed.

But I actually think that there are very good reasons why blackmailing is a crime while creating interesting photographs that some other people may try to abuse is not a crime. Using swimming pool photographs to eliminate inconvenient politicians is a morally flawed approach.

But using ad hoc quasi-moral interpretations of stories and games where people are trying to find out who is trying to obtain or offer sensitive photographs as a tool to get rid of inconvenient politicians is equally flawed. If the latter sentence describes what has happened, then no one should be resigning and the prime minister should stop trying to abuse this situation against his main foe in the party.