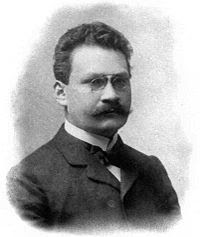 Exactly 100 years ago, on September 21st, 1908, Hermann Minkowski gave a talk titled "Raum und Zeit" ("Space and Time"; book version) in Cologne, Germany in which he proposed a natural interpretation of Einstein's special theory of relativity in terms of a geometry with an indefinite signature.

Using his words, space and time lost their independence and only their union remained physical. The distance between points (0,0,0,0) and (t,x,y,z) in spacetime is

and must be preserved by the allowed transformations of the spacetime which include both the ordinary rotations as well as the new "boosts" responsible for switching to different inertial frames (as well as translations).

This talk hasn't changed anything about physics of special relativity, as understood by Einstein, but it has affected the way how we think about these phenomena. And Minkowski's picture has made it easier for Einstein to develop general relativity in the following decade. Minkowski, who thought that his ex-student Einstein was a "lazy dog", didn't see these developments because he died in 1909 (ruptured appendix).

This video is cute because it shows how naturally elastic the Minkowski spacetime is. The areas or volumes are preserved, much like the 45° angles associated with the light rays. It follows that the distances are contracted and the processes are slowed down from the viewpoint of reference frames in the state of motion.

When I was a 10-year-old kid, there were all kinds of articles about special relativity that made me excited but none of them explicitly mentioned the indefinite signature of spacetime. Instead of rediscovering it instantly, I remember proposing a bizarre theory of a Euclidean spacetime that obeys the normal Pythagorean theorem.

Because this spacetime disagrees with the rules how the speed of light should be combined with others, I designed some even more bizarre rules how the coordinate times and proper times should be extracted from the spacetime diagrams. As a result, the composition of the speed "c" and a small speed "v" only differed from "c" by terms proportional to "v^2/c" which, I believed, was compatible with the available experiments.


Needless to say, it was a thrilling moment to realize how natural the whole picture of spacetime becomes when you admit that the metric is indefinite. Everything suddenly makes perfect sense. Einstein had to be absolutely certain about his theory once he combined the bits and pieces.

It seems obvious to me that many people interested in physics still don't appreciate the true power and the real content of the Minkowski geometry of our spacetime. All those people who want to describe gravity in terms of triangulations, condensed matter systems, spin networks, loop quantum gravity, and all these "wonderful" ideas completely miss the point. They are still thinking in the old three-dimensional way.

Since 1905, and especially since 1908, the Lorentz transformations mixing the space and time have been exactly as fundamental and well-established symmetries of Nature as ordinary rotations. They're a new part of the Lorentz group. If your hypothesis doesn't allow one to derive that the Lorentz invariance holds, it is exactly as severely flawed as a hypothesis that doesn't allow objects to be rotated in space.

Frankly speaking, I view even the "legitimate" attempts to experimentally find violations of the Lorentz invariance to be artifacts of people's inability to get the message of 1905 and 1908. Why aren't they equally eager to look for violations of the rotational symmetry? I think that the only sane explanation is that they still haven't appreciated what the years 1905 and 1908 mean for physics.

If there were any "atomic structure" filling the spacetime - aether, spin foam, causal dynamical triangulation, or any other term of this kind - then you could just check what happens with the structure when you apply the Lorentz transformations from the video above. The structure would clearly squeeze and become singular. There would exist a preferred reference frame in which the structure looks most isotropic. Relativity would be brutally violated.

The vacuum must be absolutely empty. There must be one microstate corresponding to the vacuum: the entropy density must be zero, otherwise this density - being the time-component of a four-vector - would violate the Lorentz symmetry by itself. Any kind of "matter" that is similar to the gases, liquids, and solids in any nontrivial way that would fill the space would kill relativity (and your theory).

Moreover, a region of spacetime that can be approximated by the Minkowski spacetime must be symmetric under the Lorentz transformations itself: this symmetry can't be broken, not even spontaneously. Which regions have to satisfy these constraints? Surely all regions that are small enough, relatively to the curvature of the surrounding space. But in fact, the condition must also be satisfied by large regions of spacetime as soon as all the sources of curvature inside this region may be approximated by small enough local perturbations.

Relativistic quantum field theories are the only "immediate" examples of theories that satisfy both the rules of relativity and quantum mechanics and string theory is the only theory that "goes beyond" the most obvious, local quantum field theories but keeps their essential properties. Some aspects of it probably continue to be misunderstood but whoever wants to return physics to the epoch of the aether, before 1905 and 1908, is a severely deluded, slow thinker, not a revolutionary.