We just returned from the ice hockey match. In a dramatic contest between two beer towns, HC Lasselsberger Pilsen defeated HC Mountfield Czech Budweis 9:4. It's pleasure to watch such games. ;-) After 5 matches, Pilsen has all 15 points and stands at the top of the Czech Hockey Extraleague - something that we haven't seen for very many years. 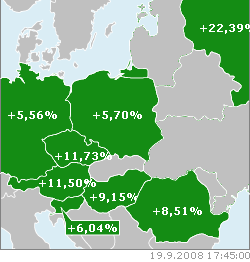 Now I just saw that those who have some stocks had a pretty good day, too. The Russian figure should actually be 28.7%, not just 22%: it reverted most of this week's losses. (Yes, the numbers such as 28.7% and 11.73% are new national records for a daily jump.) Earning money must be relatively simple for the people who have some access to fast tools and capital.

Peter F. didn't like that I haven't criticized the bailout plans of Paulson et al. Well, I accept the criticism. But I am already annoyed by this (mostly verbally fabricated) crisis, too. Markets are statistically wiser than bureaucrats in distributing resources and quantifying the value of things. But when it comes to overall quantities such as the "general confidence in the markets", they can behave in a crazy way.

The U.S. administration could in principle be more sensible - at least in isolated cases - and it seems that it is the case right now. The markets started to behave like if we lived in another Great Depression - and we're technically far from anything like the recession (the last U.S. GDP growth was 3.3% annualized): they seem to be as mad as hysterical women in the asylum or as global warming alarmists. And it's just good that someone is trying to stop them. 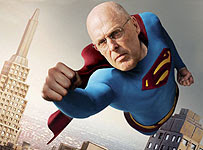 So I admit that I have some understanding for their "uniform pumping" of dollars into the economies. This is pretty much a flavor-blind adjustment of the overall global economy - an intervention of the same type as the adjustments of interest rates - and governments and central banks should probably be allowed to do similar things. They're just protecting a sensible "value of the money" and the agreement between the official interest rates and the psychologically determined risk aversion of the typical market players.

If companies like AIG had been allowed to go bankrupt, it would be cleaner from a market perspective but it could have influenced many other innocent players. Maybe, the U.S. economy could be the first one to face serious problems. And we could say that other economies won because they were stronger. Well, I understand that Paulson et al. wouldn't like this outcome and they have the right to do something about it. In this sense, Paulson behaves as a skillful manager of a huge company (the U.S.) and big financial institutions are branches of his company.

These interventions probably help the global economy, too, at least in the short-time and medium-time perspective. In 20 years, the interventions they are just doing may have slightly negative consequences but they may protect us from five bad years etc. which could be more important than what happens in 2028. These guys have already allowed Lehman Brothers to die - which means that they allowed the laissez faire principles to be more healthily destructive than during any other previous administration. So I am not going to criticize the U.S. administration for the newest "socialist" bailouts because others would have to be criticized as well.

And let me honestly confess that I am not sure whether I would have the courage to allow other big financial companies to die if I were responsible for the broad U.S. economy. Moreover, the ideas to make money market accounts safe may be good, too. Normal accounts like that simply shouldn't be risky, especially if you can avoid the risk by putting the money into your fridge (you would only sacrifice interest rates which are now pretty low in the U.S. and many other countries): it's about the definition of the money and the central banks and treasury departments and ministries of finance have the responsibility to do such things.

I have some half-baked ideas about new rules how to "naturally" regulate excessive leverage and volatility in the markets. For example, it would have similar effects as the ban on short selling that SEC is going on impose on financial stocks. Short selling is something a priori legal and sometimes helpful but in the case when it helps people to benefit from companies' losses that are mostly caused by the irrational behavior of third parties, I agree that short selling is an evil, ethically problematic, and counterproductive activity.

It is not quite the same thing as normal selling: the difference is sometimes similar to the difference between building houses and demolishing houses. Both of these things may be useful but I still think that the building part is just more important and valuable in most cases and the total profit that people make by demolishing things should be smaller than the total profit from building things - because demolishing is easier. It just sounds bad if the profits from these two activities are equally large. And whenever they are (almost) equally large, it means that the leverage in the markets is huge which is simply bad and creates instabilities.

(As you can see, I have the same opinion not only about ordinary markets but also about other things - including people's good name and even scientific theories' respectability. Empty criticism without alternatives and even without a coherent simplified picture is something I can't stand.) But let me postpone this topic.

At any rate, sorry if I have disappointed the advocates of free-market solutions who are more "clean" than I am.
Luboš Motl v 9:07 PM
Share