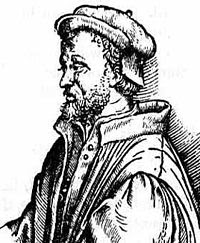 Gerolamo Cardano (or Girolamo Cardano or Hieronymus Cardanus in Latin) was born on September 24th, 1501, because his mother didn't succeed in her abortion attempts (at least this is what he was saying). As you will see, the pro-choice people want to prevent us from knowing how to solve algebraic equations. ;-)

He became quite a skillful physician. For example, he was also the first man who described typhoid fever. However, he couldn't really follow his interest in medicine professionally. The only reason why he wasn't admitted to the College of Physicians in Milan was that he was a bastard, both literally and metaphorically. :-)

Instead, he had to make living by gambling and chess and he became pretty good at both. These skills were useful not only for his practical life, to earn at least some money, but also for his gifts to the civilization. In the 1560s he studied game theory and was the first thinker to treat the concept of probability systematically. "Liber de ludo aleae" was only published a century later.


For a person who was both broke and bastard, he invented quite many things, including the combination lock, the gimbal (concentric circles attached to each other at different points, to allow the internal one to be horizontal), and the Cardan shaft (transmitting the power in motors without chains). The latter two inventions are mechanical devices with many degrees of freedom (and joints). Nevertheless, he understood that perpetual motion was impossible - except for the celestial bodies, as he said. These are pretty cool observations done a century before Newton was born.

Moreover, he was the first mathematician who studied hypocycloids, the curves drawn by a point on a disk that rolls around (or inside) another disk: the boundaries of the disks are also known as cardanic circles and were useful for first high-speed printing gadgets.

The Cardan grilles are well-known in cryptography. In a special sheet of paper, you have a few holes. Superimpose this sheet of paper on a seemingly ordinary letter and read: the subset of the letters you see will make up a secret message that was incorporated into the "non-secret" letter (that a skillful writer had to design by writing stuff around).

To make his family matters more dramatic, he had problems with his offspring, too. His favorite, eldest son was executed because he poisoned his cuckolding wife. The younger son was stealing money from Cardano (for gambling), cropped the ears of his son (Cardano's grandson), and "helped" his father to be prosecuted as a heretic for publishing Christ's horoscope in 1554. Gerolamo Cardano, the heretic, was forced to resign as a professor. But Pope Gregory XIII eventually decided to give him papal tenure (with regular annuities) and Cardano could complete his bibliography.

He has written many texts on alchemy, mechanics, medicine, probability, and natural sciences in general. However, he is remembered for discoveries in algebra, especially his formula to solve the cubic equations. But I have already written similar texts about these algebraic matters, so please read the article about Évariste Galois.
Luboš Motl v 7:21 AM
Share