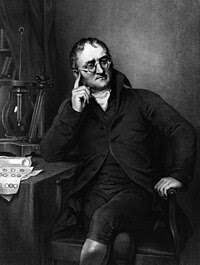 John Dalton was born to a family of a weaver (and Quakers, independent Christians dissatisfied with the existing denominations) in Northwest England on September 6th, 1766.

He is known for insights on color blindness (Daltonism), atomic theory (that we will discuss in detail), chemistry, and meteorology (the Dalton minimum of solar activity is named after him, too). He also wrote a book on English grammar in 1801. ;-)

As a kid, he was already helping his brother to run a Quaker school. Elihu Robinson, a competent Quaker experimental weather scientist, inspired John to study the weather. Dalton did quite a lot of original work in meteorology that was mostly ignored. Later, John Gough, a blind philosopher and polymath, also taught John Dalton a lot of other science and helped him to become a teacher of maths and natural sciences in Manchester.

He was actually the first man who scientifically talked about color blindness in 1794, in his paper for the Manchester "Lit & Phil" (not to be confused with Lit Crit!) society. It was a pioneering contribution but his theory was wrong, as he learned in his lifetime. He thought that the eyeball liquid was discolored in color-blind people.


His own eyeball was preserved and it turned out that he had a rare type of color blindness in which the "green" (medium wavelength) cones are completely missing. Imagine that you see #RR00BB instead of #RRGGBB in the red-green-blue notation. This disorder is called deuteroanopia: see his "rainbow". In most cases of color blindness, these "green" cones are not quite missing but they have a mutated pigment.

I won't talk about the Dalton minimum and sunspots here because the climate is not supposed to be the main focus of this text. Instead, let us look at:

First, in 1800 when he became a secretary of the "Lit & Phil" society, he began to study pressure of liquids and gases. A few years before the official discoveries, he verbally (and vaguely) formulated Gay-Lussac's and/or Charles's law about the expansion of liquids.

In 1801, he stated his Dalton's law: partial pressures of individual gases should be added to get the total result. Note that this law, one that can be given experimental evidence, strongly suggests that the different gases may "overlap" i.e. they should occupy different parts of the volume. That is already a strong hint of the atomic theory.

More importantly, he formulated the law of multiple proportions: when chemical elements combine, the ratios of their "amounts" are given by rational numbers with small numerators and denominators. We have CO and CO2 but not CO_{1.8}. The "amounts" must be measured in moles: however, the actual term "mole" was only introduced in 1893, almost a century later.

For each compound, one mole corresponds to a different mass so we must choose different units in which the "amounts" are integer-valued. (But if you evaporate them, one "mole" always corresponds to the same volume under the same pressure and temperature. I don't quite understand whether Dalton was aware of this correct normalization: probably not.)

At any rate, in some proper units, the mixing ratios are rational. This strongly suggests a discrete underlying structure: atoms. He was not the first one to talk about this concept: Democritus and Lucretius did it millenia ago. But Dalton's picture was somewhat more modern. He also introduced a terminology for molecules that wasn't quite modern: the compounds with 2,3,4 atoms were called binary, ternary, quaternary compounds: see his picture of a new system of chemical philosophy.

He understood the following points properly:
There was also one point that wasn't so good:
He clearly assumed that things had to be "simple" and he has cut his throat by Occam's razor in this case ;-) because he had to believe that water was HO (not H2O) and ammonia was NH (not NH3). Well, Nature is obviously not the "simplest one" in this particular sense even if your chemical "philosophy" would lead someone to believe such a principle. In fact, when he determines that the ratios should be given by integers, it would be extremely stupid if Nature didn't prefer other integers beyond the number 1, at least in some cases. :-) Nature would be wasting its possibilities: there are many good reasons why the number of legs is 2 or 4 and not 1 all the time.

Of course, Dalton neglected nuclear physics in his principles: atoms of the same element may differ by the number of neutrons (isotopes) and other reactions, nuclear reactions, can also change the identity of the atoms. But we shouldn't ask for too much from a thinker in 1800.

I want to add some comments about the testability of ideas and the time-dependence of the amount and character of evidence in favor of the atomic theory. In the ancient Greece, comments about atoms were pure philosophy that was scientifically as good (or bad) as other conceivable philosophies.

But during Dalton's life, things were already very different. The law of partial pressures and especially the rational mixing ratios were extremely powerful weapons that could falsify or at least strongly disfavor many specific enough models that contradicted the existence of atoms. These laws surely didn't tell us everything we wanted to know about the structure of matter: however, they certainly told us something - a lot, in fact - and only scientific dilletantes could think otherwise.

Once the moles were introduced, people could verify new consistency checks about the atoms. Finally, the scientific enemies of the atoms evaporated in 1905 when Einstein correctly explained the Brownian motion (in work also independently pursued by Marian Smoluchowski in 1906). The alternative theories that would explain the chaotic motion of particles in liquids had to be extremely contrived, especially if they wanted to achieve the "distance goes like square root of time" power law for the random walk.

It had to be a random walk and its typical constants were pretty much universal so they had to prove some discrete collisions of basic and rather universal building blocks of all materials: the atoms and molecules. The coefficients told us something about the size of the atoms, too. All these things occurred long before we could actually "see" atoms just a few decades ago. The people who say that they must first see quarks or strings before they take the theory seriously don't tell us anything valuable about science: the only thing these people reveal is that they're narrow-minded, uncreative, slow idiots.