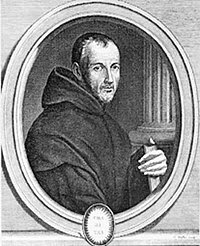 Marin Mersenne was born on September 8th, 1588, which is exactly 420 years ago. Exactly one week ago, on September 1st, we also celebrated the 360th anniversary of his death (lung abscess). Together with the two new numbers (two new largest known primes) announced below, we have a quadruple opportunity to talk about Mersenne.

After two years, the GIMPS project found two new Mersenne primes (of the form 2^p - 1) almost simultaneously. Only 46 such numbers are known and only 44 of them are known to the public so far. ;-)

The numbers are called after Marin Mersenne and I will talk about him below.

M45 and M46 were announced on August 23rd, 2008 and September 6th, 2008, respectively. The verification process took two weeks or so (in each case): the exponents are therefore around 40 million which means that they will exceed the 10 million decimal digits condition to win USD 100,000 (one-half of which goes to the person who runs the program).

Marin Mersennus was born to peasants in the West of Paris (Maine). He was educated in Le Mans but not on the 24-hour sports car endurance races but rather at the local Jesuit College. He became quite an authority in theology but he also studied mathematics, music, and the work of other great French minds such as Descartes, Étienne Pascal, de Roberval, de Peiresc, and others.

He devoted years to writings about philosophy and defense of science - or his version of science. His theological writings were addressing topics that no longer seem too hot today ;-) but his texts were directed against cabalism, animism, pantheism, and magical and divinatory arts. He defended Descartes against various other clerical critics.

The text above could indicate that he was a sort of religious zealot but a crackpot in mathematics and physics.

However, that would be a gross oversimplification. He coined the Mersenne primes, although he has also formulated many invalid (and naive) hypotheses about them (roughly speaking, that almost all numbers of the form 2^p - 1 are primes, which is ludicrous). He also played with doubly Mersenne and Catalan-Mersenne numbers. The latter are 2, M(2), M(M(2)), and so forth, where M(p) = 2^p - 1. I did extremely similar things as a small child, too. :-)

In music, he proposed a new tuning system with the frequency ratio corresponding to an equally tempered semitone to be (2/(3-sqrt(2)))^{1/4} which is close to 1.059 or the 12th root of 2 (the "optimal" way to divide the octave) except that his ratio could have been "constructed" by the usual geometrical methods. This looks like a completely meaningless numerology to me, an educated musician. If he used 1.059, which can also be constructed, he would obtain an equally good convention. ;-)

This brings me to Marin Mersenne as the father of acoustics. How did he become the father of acoustics? Well, the numerology above would surely not be enough. Instead, he became the father of acoustics by becoming another early string theorist. Mersenne and Galileo independently discovered the complete laws of vibrating strings and the qualitative relationships between waves on a string, waves in the air, and perceptions in the ears. That package included harmonic frequencies of the string and other insights.
Luboš Motl v 9:08 AM
Share