Old SiteMeter is back

New SiteMeter was much less usable than the old one

As you can check, they managed to return to the old SiteMeter within 24 hours. Congratulations. The whole text below becomes obsolete.

Update: Sitemeter claims that they have heard us and they will be implementing a rollback to the website immediately. So please, give them some time. Your patience is what they deserve in this painful situation.

SiteMeter.com, a web service responsible for the counter near the bottom of the right sidebar of this page, has switched to new servers with new software. Click the picture below to zoom in. 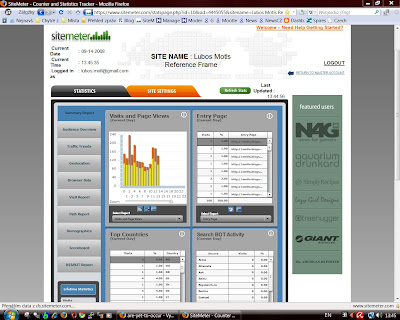 The statistics is suddenly shown in Flash applets. Because of the following and other reasons, I believe that the old SiteMeter was more usable:
and let me finish because there are many other problems that make the new system virtually unusable. The creators of the new system probably like Flash (and for many purposes, I also think that Flash is simply great) but what I simply don't understand is why the owners of SiteMeter.com allowed a change that manifestly makes things worse from a user's viewpoint.

The new programmer can perhaps know the "progressive" technology of Flash but there are dozens of other, more important things that decide about the usefulness of similar services: common sense, the knowledge of users' actual behavior, some basic knowledge of information theory, experience with similar and competing gadgets and the knowledge of their features. It's not true that every change is a positive one and SiteMeter.com seems to have forgotten about this fact.

Whenever I am changing something in the template (or in any program etc.), I am asking whether a vast majority of the users will be able to do certain favorite activities as easily as they did before. It is bad to move things around because people are used to certain locations inside the menus etc., but in the name of a greater good, it is often logical to move and unify gadgets and items. But are there equally usable and fast replacements for all important services of the old system?

If the answer is No, the change simply has to be rejected. Many visitors think that the technological aspects of this blog are excessively complex and I understand their objections: in fact, I've been hearing these things since 1994 when I dared to place the first animated GIFs and forms on my web pages, being 10+ years ahead of time. ;-) But sometimes, albeit rarely :-), I prefer the "minimalistic" design, too.

I tend to think that the lists of visitors are effectively text-based packages of information that are the least appropriate ones for Flash. The programmers behind the new SiteMeter might disagree. But I can't believe that they don't understand that if their service slows down by an order of magnitude (as measured by the typical time needed to get the information that the users typically want) and loses a portion of the data such as the domains, it is simply bad for the user.

For example, it takes a lot of time to learn that this SiteMeter article now attracts about 10% of the traffic to this blog - something that I could have seen by 1 click (on a button in my Firefox taskbar). And I have actually done enough "research" to know that this problem of the new SiteMeter won't go away if I spend more time by learning to deal with the new setup.

I encourage SiteMeter.com to restore a classic version to view the data or one that is as close to it as possible, at least as an option. It seems that almost all users agree with me:
Positive reactions are yet to occur. The old SiteMeter wasn't perfect and I would have a lot of suggestions how to improve it and speed up the activities that typical users/webmasters like to do. But it seems that the actual changes went exactly in the opposite direction.
Luboš Motl v 1:09 PM
Share