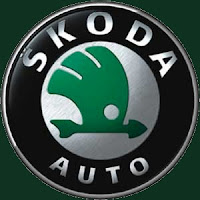 The Škoda cars (the logo shows an arrow with wings) used to be among the world's best cars during the First Republic (Czechoslovakia 1918-1938). Well, communism changed things a little bit. But at least, the cars arguably remained the best cars in the socialist bloc. They were exported to many places including the U.K. where they provoked uncountable jokes.

With the Volkswagen's decision to buy the Škoda factories, things began to change. You know, when a great company deteriorates for half a century, it simply needs a leadership by someone who has known what he was doing. So you should imagine that their business is a result of the somewhat cheaper Czech labor and the talents of the local engineers who are comparable to the German ones but also the German experience and habits (effectively those from Porsche) wherever you could have reasonable doubts about the Czech skills and approaches or a missing know-how.

First, Škoda became able to produce some standard, average Western cars such as Fabia, Octavia (the most popular product so far), and the old Superb: all these names were recycled from the good old days 50-80 years ago.

But in 2008, the situation may have changed even more dramatically. The new Superb has received almost flawless reviews everywhere - for example, The Mirror, The Independent, The Sunday Mail, CarKeys, Scottish Daily Record, Pertshire Advertiser, WhatCar, TotallyMotor, CarPages, and many other places that essentially claim that the model has no competitors.

It's the first car that has the Twin-Door system: you can open a smaller trunk or a gigantic trunk. ;-) It can park automatically and there are many other electronic achievements that would look unthinkable for a Czech car as recently as 10 years ago.


I've spent some time looking at the car whenever I was waiting at the Prague Airport ;-) and if you're buying a car, this one is recommended to you. In the U.K., it debuts today: see Škoda U.K. It starts below GBP 15,500 but it may be destined to beat the cars in the slightly higher category, too.
Luboš Motl v 8:13 AM
Share