Pakistan: they killed the Czech ambassador 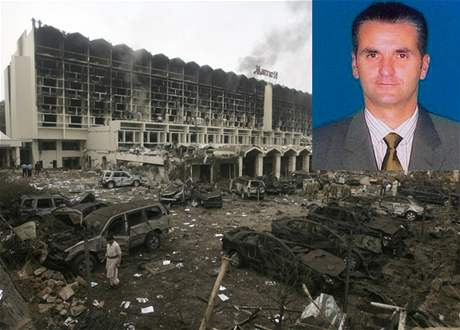 Once the police found the body and confirmed the sad news, the headline was changed.

It was known from the beginning that the ambassador, Ivo Žďárek (47), was in the hotel (the Marriott Hotel ★★★★★ in Islamabad) during the explosion. Bastards!

A month ago, he worked as the ambassador to Vietnam but moved to Islamabad. His office covered both Pakistan and Afghanistan.

The one-ton-of-explosives truck (the truck followed a small car that hit the gates and "opened" them) suicide attack has also killed 50+ people (mostly hotel staff and drivers) plus CIA agents whose number remains classified.

I wonder whether Pakistan is able to protect their nuclear weapons if they cannot protect a five-star hotel against cheap old dirty Al-Qaeda tricks.
Luboš Motl v 8:46 AM
Share