We will sweeten it up to Europe

The Czech government that will take over the EU presidency in H1 of 2009 has begun a campaign.

That's an ambiguous Czech idiom that either means that "We will improve Europe's life" or, more frequently, something like "We will give Europe a proper thrashing" - symbolically speaking, of course. ;-) OK, it may be better to say "We will punish Europe and cause it some trouble." And BBC has even contacted translators creative enough to translate it as "We'll give Europe a taste of its own medicine." :-)

The "actors" are architect Ms Eva Jiřičná, dancer Ms Darja Klimentová, scientist Dr Antonín Holý who just discovered a cure for cancer, supersymmetric model Ms Tereza Maxová, ice-hockey player Mr Jaromír Jágr, soccer goalie Mr Petr Čech, and conductor Mr Libor Pešek. In the scene, they are pretending to be bored Eurocrats. Note that each of them uses the sugar cubes in a way that reflects their job, assuming that otherwise undernourished models are supposed to eat sugar and conductors are expected to rhythmically throw them into the coffee cup.


The deeper meaning of the short movie, besides being mildly provocative, is not quite clear to me. It's been also said that the nations are losing their independence in the EU as a lump of sugar that dissolves in a cup of coffee. And two years ago, the EU even closed some sugarbeet processing factories. Nevertheless, yes, it is a rather typical Czech Švejkian approach. :-) 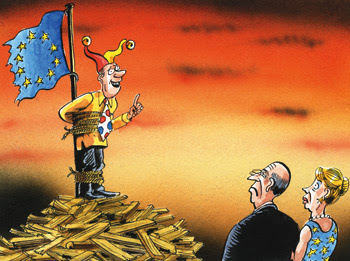 I assume that this approach will reinforce the picture of the Czechs as heretical pragmatic skeptics, as described by The Economist yesterday. ;-)

But as you can see, the main actors are the sugar cubes. They were first produced in in a Moravian factory in 1841 in Austria-Hungary, now the Czech Republic, so they are probably the most widely used Czech invention. ;-) The authors of the movie apparently think that the sugar cubes are a perfectly neutral symbol of the European Union because Jacob Christoph Rad who owned the company was born in Switzerland which is not an EU member. ;-)

Once upon a time, Juliane, the wife of Mr Rad, got injured by a big piece of sugar. She raised her finger and told her poor husband: "Why don't you do something about it? Aren't you the director?" So he created 300 white and pink small prototypes for her, molded by his own gadget. Isn't it sweet? Well, it worked: Mr Rad had 15 children in total (that's three times Sarah Palin's score, Gordon!).
Luboš Motl v 10:06 AM
Share