The WMAP probe has detected a nonzero velocity of galaxy clusters between the constellations of Centaurus and Vela:

1E 0657-56, previously used to "directly see dark matter" (TRF I, II), is an example of such a cluster. I am not sure whether the present authors fully realize this direct link with dark matter: I would bet that there is only one new effect going on with these clusters, not two new effects.

The motion can't be explained by the normal FRW cosmology or anything inside the observable horizon, they claim. It's been called "dark flow", to make it sound as mysterious as "dark energy" or "dark matter". 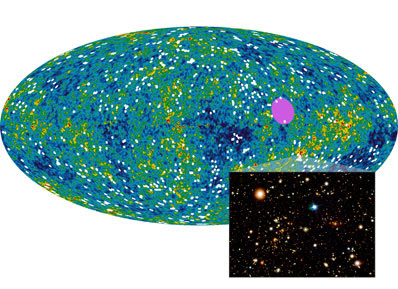 The driver of the motion is arguably behind the cosmological horizon! The paper by Kashlinsky, Atrio-Barandela, Kocevski, and Ebeling will be published this week in online Astrophysical Journal Letters but you can already read the papers as preprints (hat tip: mtheory):

Thanks to Gene Day!

Recorded talks from Strings 2008 are available now. Choose among 41 talks and click "detailed record" to see the video.

Even more off-topic: Firefox users should click Help / Check for updates, and update to Firefox 3.0.2, especially if Firefox was collapsing when quitting. It seems fixed now.
Luboš Motl v 9:14 AM
Share