An experimental proof of most low-energy signatures of string theory found?

Because the LHC has been delayed by six months, the American experiments at the Fermilab have half a year to find something interesting in their results.

And it is conceivable that the CDF team just found something shocking.

They claim that they see quite a lot of dimuon events in which at least one muon is produced further than 1.5 cm away from the collision point, i.e. outside the beam pipe. In the Standard Model, muons are normally born much earlier i.e. much closer to the collision point.

There has to be another particle that lives for a while - about 20 picoseconds - until it decays inches away from the beam pipe. A scrutiny shows that it cannot be any known particle. Instead, a new paper by Giromini et al. claims that there seem to be three new states with energies 15 GeV, 7.3 GeV, and 3.6 GeV. The heavier states cascade decay to the lighter ones while the lightest one decays into a tau pair after 20 ps or so: so the 15 GeV particle should decay to 8 tau's! To say that the masses of some dark sector states should be fine-tuned to be 2m_tau, 4m_tau, and 8m_tau surely looks bizarre.

More generally, however, we do see a cascade decay into many leptons that tend to fly in the same direction: "lepton jets". Let's not get carried away here: "many" has been redefined to mean "two" for the purposes of these particular events. And so far, "leptons" means "muon" because they are much easier to be detected in the "jets". 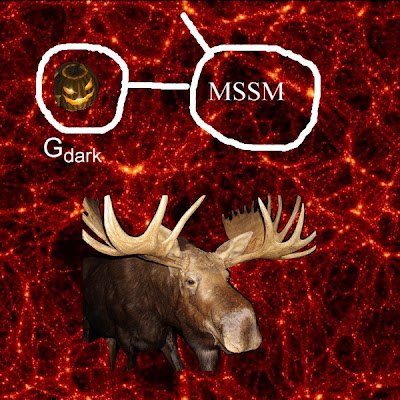 Now, you can get a fresh model that seems to generate - or predict - lepton jets:

In this picture, dark matter is composed out of particles in a hidden sector: they're charged under a hidden group, G_dark, that is broken near a GeV. This assumption may explain some recent anomalies found by ATIC and PAMELA Anderson ;-) collaborations in terms of dark matter annihilation: see a good enough interpretation of the positron excess at PAMELA released yesterday:

(However, the positrons could also arise from nearby pulsars, which would be unrelated to dark matter, as the PAMELA team hints.)

Now, these models of dark matter require new light scalar fields which are typically unnatural at the quantum level. Much like in the case of the Higgs, this low mass has a natural interpretation if the world is supersymmetric.

So Arkani-Hamed and Weiner did the natural thing and extended their (and Tracy Slatyer's and Douglas Finkbeiner's) model of PAMELA data - that also includes some older concepts explaining "inelastic" DAMA and "exciting" INTEGRAL anomalies - to incorporate supersymmetry that can explain the otherwise unbearable lightness of the scalar masses. With this supersymmetric extension, they derived a new prediction: "lepton jets".

It seems that this may have been just observed by the CDF collaboration. If true, which I now estimate to have chance about 30%, it is an experimental confirmation of a prediction by supersymmetry combined with a "natural" phenomenological model by Arkani-Hamed and Weiner originally designed to account for the PAMELA positron excess. ;-)

Needless to say, anti-stringy and anti-supersymmetry mujahideen Peter Woit has "understood" the paper by Arkani-Hamed and Weiner so that it rejects supersymmetry. The whole point of the paper is to predict what happens if supersymmetry is applied to the hidden sector model of dark matter. One would expect that even a linguist should be able to guess that the paper involves supersymmetry if the theory mentioned in the title is called "superunified".

Because the acronym "LSP" (lightest supersymmetric particle) appears more than 45 times in the paper, even slightly retarded children could start to feel that the paper predicting lepton jets has something to do with supersymmetry. Peter Woit doesn't. Or does he?

Tommaso Dorigo who considers the CDF experimenters behind the paper exceptionally good is attempting to spread rumors that Arkani-Hamed and Weiner may have heard about the upcoming experimental paper in advance. I would like to stress presumption of innocence and I am confident that under fair and peaceful circumstances, Nima and Neal will tell us the full, honest story of their model. I am primarily talking about Nima because Neal Weiner has already declared that he has had no idea about the CDF paper.

Although there can't ever exist any 100% certainty, I absolutely prefer to trust every word by Nima than random rumors by Tommaso and I won't allow any conspiracy theorists to "work" on their purely speculative accusations in the comments. The model by the four authors accounting for the PAMELA and other data had to be constructed - which was somewhat non-trivial and couldn't be heard from the experimenters.

And the addition of supersymmetry was, on the contrary, very natural and the experimenters were not needed. Demanding supersymmetry is what a good physicist always tries to do when he or she sees unnaturally light scalar particles. And this addition often leads to spectacular results such as the lepton jets. I tell you it is what should be done; they were braver and have actually done so. ;-)

I know Nima too well to be certain that he can do much more non-trivial things than this simple, superficial homework for which he could share a Nobel prize. ;-)

The model proposed to match these experiments is a typical model that emerges from string theory, one with supersymmetry, preferrably gauge-mediated supersymmetry breaking, a hidden sector, and a quiver structure of matter. People - string phenomenologists and other phenomenologists - were just used to think that everything in the hidden sector had to be very heavy. There might be a loophole, with these light particles that are nevertheless hidden.

Obviously, the next step is to look at more detail what the model actually is and which compactifications are preferred, a natural next step which may lead to new, detailed predictions. There is already a paper out,

by Conlon, Maharana, and Quevedo, in which it is claimed that the string-theoretical models with D-branes at singularities (like D3- and D7-branes at del Pezzo singularities: see e.g. our comments about the Verlinde-Wijnholt local models) generically contain the required hyperweak gauge group and could account for the ghost muon anomaly at the CDF detector.

If this model or a similar model is correct, the MSSM should be observable at the LHC and I should also be going to win a USD 10,000 bet against Jester who doesn't believe SUSY. All the opponents of supersymmetry and perhaps string theory may be splashed into a toilet sooner or later - by a proof that they've been feeding their listeners by excrements for decades. But there is still this "if".
Luboš Motl v 1:09 PM
Share