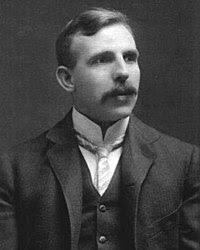 Ernest Rutherford died on October 19th, 1937, i.e. 71 years ago. Why? Because he needed an umbilical hernia repair. Since he was a baron (Baron Rutherford of Nelson), the feudal rules dictated that he had to be operated by a titled doctor. The delay killed him.

The message is that you should refuse to be knighted if you are at risk of needing this type of surgery. ;-)

But we should start at the beginning. Ernest was born as "Earnest" (because the hospital employees were illiterate) on August 30th, 1871, in New Zealand into a family of a farmer who immigrated from Britain. He studied at some local schools, presided over the local "debating society", and went to the Cavendish Lab in Cambridge, U.K. to get a PhD. He briefly became the world champion in the distance beyond which electromagnetic waves had been detected.

Ernest focused on radioactivity pretty soon. He invented the names "alpha, beta" for the types of radioactivity. Whenever things look mysterious, people use Greek letters or M to label them. ;-) In 1898, he became the boss of physics at McGill in Montreal. He demonstrated that the radioactive decay influences the bulk of the matter and the half-time is thus universal for each radioactive substance. That allowed the people to use the radioactive decay to measure time, proving that the Earth was older than previously thought, among other things.

Bizarrely enough, these discoveries earned him the 1908 Nobel prize in chemistry. At that time, people didn't realize that radioactivity was no chemistry. Why didn't they realize that it was no chemistry in 1908? Because they didn't know about the atomic nuclei yet. Atomic nuclei were famously discovered one year later, in the 1909 "Geiger-Marsden" experiment supervised by Rutherford himself. In this way, Rutherford has proved that his prize 1 year earlier was a mistake. ;-)

In this experiment, helium nuclei - alpha particles - are reflected from a thin gold foil into a zinc sulfide sheet that lights up when hit by an alpha particle. Because they could clearly see that the alpha particles are sometimes reflected exactly in the opposite direction, backwards, it proved that the atoms were not made out of "plum pudding" (the plums were the light electrons in this model while the positive matter, dominating the mass, was uniform!).


Instead, they had to have a very heavy object inside - with a mass comparable to the alpha particles (which electrons clearly don't have). The plum pudding model was killed and the atomic nucleus was born: in some sense, the newer picture of the atom is the exact opposite of the old plum pudding model because the negative matter is "diluted" - in the electron clouds - while the positively charged matter is concentrated.

A similar history repeated itself later when the quarks - heavy nuclei inside hadrons - were discovered in Bjorken's "deep inelastic scattering" experiments. The Rutherford experiment was the moral beginning of high-energy physics - the strategy to learn about the short-distance architecture of matter by making high-energy collisions: Rutherford was the forefather of all particle accelerators. This comment is not just a philosophical game: Rutherford's technologies were essential for the Manhattan project, too.

In 1919, Rutherford was also able to transmute the elements (nitrogen to oxygen) as the first person in the world. But Rutherford wasn't just an experimenter: he was an amateur theorist, too. When Niels Bohr was working on the atomic orbits around 1921, they sometimes talked to one another. Rutherford proposed a new particle, a neutron, that holds the protons together. Neutrons were found in 1932 by Rutherford's associate, James Chadwick.

Now, Rutherford was right that something had to beat the repulsive electric force between the protons in the nucleus. And he was right that there were neutrons in the nucleus (except for the light Hydrogen 1). But his link between these two facts wasn't quite correct because protons inside the nucleus attract each other by the strong force, too. The particles contributing the attractive force are not neutrons but rather pions or gluons (depending on the scale of your effective field theory). But the main point of his guess was right, anyway.

Many things including rutherfordium (Z=104) are named after this rapper.
Luboš Motl v 9:27 AM
Share