A reader using the "trademark" of the Office of the President of Harvard University informed us about a hilarious event in Cambridge, MA, namely the Harvard Sustainability Celebration:

Green.harvard.edu: green is the new crimson

If they can change the color of the Harvard logo so easily, maybe their planet is also green, not blue, after all. The Harvard College Democrats ask why the "reduce reuse recycle rethink" posters are 4 times larger than the previous record holders.

But they are kind of obliged to be happy about the keynote speaker, Mr Al Gore, who is famous for his big house, jet, and the so-called Gore effect. Dictionaries explain the term as

It seems to be working again: see Weather Underground (no, it is not the leftist militant group that may have inspired Barack Obama: the name of the weather service is just a good joke).

Disclaimer: this picture is not real.

In Cambridge, the warmest October 22nd occurred in 1979 when the temperature climbed to 83 °F. Well, it doesn't look like what they see today. Even the average high temperature for this day is 60 °F which is still far too high. After the noon, the temperature in Cambridge is 44.5 °F. Tonight, it is predicted to drop to 34 °F, close to the record low of 28 °F measured in 1940. 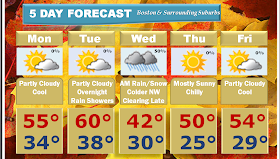 The forecast for Greater Boston from Sunday looked even more dramatic. Al Gore's speech was on Wednesday. Click the picture to see that on Sunday, they actually predicted snow for Wednesday. That didn't happen, after all, but nearby Vermont did receive its first snow this year today.

For Thursday night (the day after ... the speech), the temperature in Cambridge is forecast to drop below the freezing point to 28 °F which, if true, will beat the record low temperature set in 1883, which means exactly 125 years ago, when it was 29 °F. Not bad! (Sorry, during Thursday, the prediction of 28 °F for tonight was raised to 31 °F; not quite a record but still below freezing.)


Moreover, the phenomenon present in Cambridge in order to discuss global warming seems to be driving rain and hail, with the probability of rain indicated as 60%. ;-) At 1 p.m. local time, they report a cloudy weather with isolated showers.

(See a very lively web camera at the Science Center and Harvard Yard.)

The organizers were ready for the effect, as shown by the e-mail from the Office of the President, president@harvard.edu:

Dear Members of the Harvard Community,

Although today's weather will hardly remind us of the serious problem that is global warming, today's event - the Harvard Sustainability Celebration, with a keynote address by former Vice President Al Gore - will go on, as scheduled, in Tercentenary Theatre with a program beginning at 4 p.m. We very much hope that you will attend and enjoy the festivities.

Starting at 3 p.m., we will be serving hot cider and soup to keep everyone warm; please dress for our changeable New England weather. Henry Longfellow, onetime Harvard professor and longtime Cantabrigian, once remarked, "The best thing one can do when it's raining is to let it rain." We sincerely hope that, this afternoon, it won't rain. But even if it does, Harvard celebrates Sustainability with spirits undampened.

Office of the President
http://www.green.harvard.edu/

I wonder whether the author of the e-mail above realizes the huge tension between her or his conventionally wise approach to rain and his or her fashionable attitude to a slightly warmer weather. As Gene has pointed out, one of the things that don't seem to be sustainable at Harvard in the medium term is rational thinking. Instead, Harvard will become an accelerator of its own commitments to sustainability - what a newspeak.

During the presentation of the Spanish edition of Czech President Václav Klaus's book,

former Spanish prime minister José María Aznar (the man on the right side of the picture; Klaus is on the left) denounced climate change as a new, expensive religion created by the enemies of freedom (AFP). Hat tip: Philippe.

Click the picture for more details and a video of Aznar's speech (unfortunately in Spanish). If you enjoy reading similar news, you may try the climate category on this blog.
Luboš Motl v 6:15 PM
Share