One month ago, we celebrated the birthdays of two great physicists. The timing is not that important: it's the content that matters here. :-) Oskar Klein belongs to the history textbooks but Murray Gell-Mann is happily with us. Congratulations! 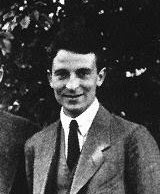 Oskar Benjamin Klein was born near Stockholm to a rabbi's family on September 15th, 1894. You shouldn't confuse him with Felix Christian Klein, a Prussian mathematician who lived half a century earlier.

Oskar Klein was a student of Svante Arrhenius, the guy who found out that the greenhouse effect was logarithmic. Oskar worked at the Nobel Institute and wrote papers about chemistry as a high school student.

In 1914, he wanted to do research in Paris but as the number indicates, he was drafted to the world war. After a couple of years, his service ended so he returned to Arrhenius. But he also met Hendrik Kramers who was a student of Niels Bohr. In 1918, he began to visit Copenhagen with a fellowship. He fixed some bugs in Bohr's work on molecular collisions and wrote a thesis on molecular motion, extending the Brownian motion to ions, in 1921.


When he got his PhD, he began to write semi-popular, blog-style texts on physics. One of them explained why Swedish philosophers who opposed relativity were wrong. In 1923, Klein married Gerda Koch and with Bohr's help, he got a job in Ann Arbor, Michigan.

In Michigan, he quickly understood the anomalous Zeeman effect: the splitting of spectral lines is proportional not just to "L" but to "L+2S" where S is the spin. Klein continued with the angular momentum of molecules and, while teaching the effects of electromagnetism and gravity at the same moment, he was getting ready to tackle the unified field theory in 1924.

If you read the 1919 paper by Kaluza, it seems pretty clear that Kaluza knew how the classical equations of GR and electromagnetism in four dimensions can be obtained from GR in five dimensions. But he really didn't know that the extra dimension should be compact. What he did was a dimensional reduction, not a real compactification.

It just happened that Oskar Klein came to the idea of a fifth dimension independently: he was thinking about massless particles in five dimensions: the mass seen in four dimensions is simply the fifth component of the momentum.

Back in 1921, Einstein allowed Kaluza's original paper to be published. Badly enough for Klein but happily for science, Klein contracted hepatitis in Copenhagen in 1925. That allowed him to return to serious work. Wolfgang Pauli told him about Kaluza's results and Klein "tried to rescue what he could from the shipwreck".

At that time, it was realized in the quantum community that the momentum is discrete if the dimension is compactified. Klein was able to use this result in the context of Kaluza's theory. That's great. So he realized that the dimension had to be compact and identified its isometry with the electromagnetic U(1).

Klein also found it natural for the radius of the dimension to be close to the Planck length, a fact that would soon lead to the falsification of the simplest Kaluza-Klein theory, because of the unbearable lightness of being of the electron. (By the way, no, I don't know whether Milan Kundera was really an informer.)

At that time, Nature was publishing top research in theoretical physics. His article appeared there in 1926 and intrigued people like Fock, Rosenfeld, de Broglie, and Struck. However, people at that time had to understand a lot of other, more elementary and down-to-Earth ("testable") physical phenomena so the interest in his unified field theory unfortunately faded away at that time. Dirac thought that Klein was trying to solve too many problems at the same time.

Still in his great year of 1926, while recovering from hepatitis, Klein wrote their famous Klein-Gordon equation. Schrödinger did so earlier, as a relativistic mutation of his normal equation, but didn't publish it because he realized that the fine structure of the Hydrogen atom comes out incorrectly. See also an article about Vladimir Fock, the Soviet co-discoverer.

Around 1927, as Lars Brink reported, Klein was recommended to focus on teaching. Nevertheless, he continued with his research, together with Pascual Jordan: second quantization was one of his topics. He clearly became the world's #1 in these matters, as we will emphasize later. Yes, as you can see, Jordan had no trouble to work with Jewish physicists such as Klein.

Klein and Jordan found the link between the quantum statistics and quantum fields, while second-quantizing Schrödinger's equation. Jordan-Klein matrices are named after them. Klein and Yoshio Nishina worked on Compton scattering and Klein clarified some misunderstandings about the nature of positrons ("Klein paradox").

In 1930, Klein returned to Stockholm. In the decade that followed, he helped some physicists-refugees including Walter Gordon (from their equation). Since the 1930s through 1960s, Klein attended many conferences and the most fascinating one was the 1938 Warsaw Conference. We will look at his picture of the world in 1938 more closely.

If you know what "Klein" means in German, you may figure out which physicist has both the linguistic authority and expertise to write captivating things about Oskar Klein and other physicists as seen in 1938. Yes, see:

Yes, I definitely recommend you this article because it is one of the cutest analyses of the history of physics as made by a true professional.

David Gross shows that all the big shots, including Heisenberg (who wasn't present physically), Bohr, de Broglie, Eddington (who was already a full-fledged crackpot at that time), Gamow, Fowler, and others were immensely confused about some very basic matters. They generally and unreasonably believed that quantum mechanics would or should break right behind the corner. Moreover, they had no understanding that the particle/field duality applied both to fermions as well as bosons (i.e. the electromagnetic field). In fact, you can see that the very concept of a "photon" was still controversial in 1938.

On the other hand, what Oskar Klein presented in 1938 was arguably on the same conceptual level as the Standard Model. He was just so damn close! He fully understood that there are bosonic and fermionic fundamental fields that should be second-quantized and that generate particles. He knew that the exchange of bosons is responsible for forces.

Moreover, he sorted the elementary fermionic particles of his era - electrons and neutrinos; protons and neutrons - into SU(2) doublets (realizing that they have anti-particles, too). And he supplemented the U(1) electromagnetic field with a whole 2x2 matrix of other bosonic fields that are responsible for other forces. More concretely, he would identify the off-diagonal elements with Yukawa's pions (rather than the W-bosons: the different types of nuclear interactions were not really understood well).

All this reasoning was obtained by a careful conceptual analysis of the Kaluza-Klein theory. There were many subtle technical bugs - he didn't realize that the SU(2) symmetry was there at the fundamental level (only U(1) was his organizing principle) but conceptually speaking, his theory was in the same universality class as the electroweak theory. Nothing essential for the construction was missing.

With his ideas currently viewed as basic tools of string theory, Oskar Klein was 30 years ahead of his time. If you see how relatively clear his picture of the world was before the war began, you may share my feelings that many of the later developments in physics - when Yang-Mills symmetries etc. had to be re-discovered - were just far too slow: pathetically inefficient.

From the modern perspective, it seems so obvious that Oskar Klein knew what he was talking about much more so than any of the "more famous" guys. I wonder whether there was any way to "prove them that they should listen" and "force them to listen" to Klein. That could have sped up physics by 25 years or so.

Klein later worked on cosmology, with Hannes Alfven, and wrote popular books and books about religion and science. Nevertheless, his amazing visions in 1926 and 1938 make him one of the finest theoretical physicists of the 20th century. He died in 1977. 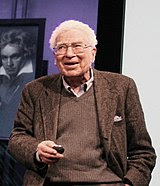 Murray Gell-Mann is an amazing scientist. I met him at Sidneyfest in 2005. So of course, I asked him about his cute commercial for Enron (Keep Asking Why) ;-) as well as about Feynman's opposition to teeth brushing: yes, Feynman really believed it was a superstition. But let us start at the beginning.

Murray Gell-Mann was born into a family of Jewish immigrants on New York's Lower East side on September 15th, 1929. The surname is an idiosyncratic way to translate a Russian Jewish last name, Gel'man.

He has been a child prodigy from the start. When he was 15, he graduated valedictorian and entered the Harvard for dummies, as Yale is called in Cambridge. ;-) He earned a Bc in physics when he was 19- and a PhD from MIT when he was 22-. After a postdoc job, he became a professor in Chicago and Caltech 3 years later.

We're already in the 1950s. A lot of cosmic ray particles were observed: see Brian Cox's video for the context. He introduced a new quantum number, the strangeness, that would also later lead him to a classification scheme of the particles based on the SU(3) flavor symmetry. Independently of George Zweig in 1964, Gell-Mann postulated the existence of quarks.

There were many things that led him to the quarks, including the 1955 Gell-Mann-Nishijima formula,

Because his term "the eightfold way" - also a title of a book with Yuval Ne'eman - originated in Buddhism, it shouldn't be shocking that the term "quark" was imported from James Joyce's "Finnegan's Wake". Zweig called quarks "aces" - a term that became as popular as "screwing string theory" for "matrix string theory".

Gell-Mann, together with Harald Fritzsch, improved the ideas of Nambu and Han about the quarks' colors and wrote down the theory of quantum chromodynamics, without realizing that it was asymptotically free. Anyway, the key role that Gell-Mann played in the understanding of the strong force seems unquestionable, especially once I also mention his discovery of current algebras and nonlinear sigma models for pions, so let me move on.

Together with his colleague and rival, Richard Feynman, Gell-Mann has found essential things about the weak interactions, too. Independently of Sudarshan and Marshak, they realized that the weak interactions were of the V-A type (vector - axial vector: this combination was appreciated as a candidate since the Yang-Lee discovery of the parity violation), i.e. that the gamma matrices you have to insert in between the Dirac spinors, to create a current (whose square enters the four-fermion interaction sketched by Fermi), have an odd number of indices.

In the 1970s, Gell-Mann's authority was essential to keep string theory alive at Caltech, one of the centers at that time. Nevertheless, Murray couldn't protect John Schwarz from Feynman's jokes in the elevator - e.g. "How many dimensions do you live in today, John?" :-)

Since the 1990s, he studied complexity and has been associated with the Santa Fe Institute. Many people love to say many fashionable things about emergent phenomena but you can check that Gell-Mann thinks, just like I do, that all these emergent phenomena are derived from a more fundamental theory: "you don't need something more to get something more". :-)

Gell-Mann is a keen bird-watcher and linguist who is even able to teach Chinese colleagues how their own names should be properly pronounced. :-) He is thrilled by the question whether all the languages have a common ancestor. There are lots of articles on this blog related to Gell-Mann but let me remind you about two videos:

Google talk: On Creative Ideas
TED talk: On Beauty and Truth in Physics