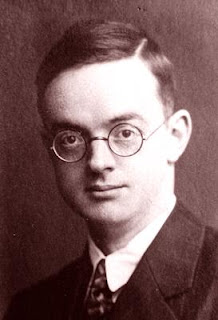 Pascual Jordan was born on October 18th, 1902, in Hanover, Germany, into an old noble Spanish family where all first-born sons were named Pascual Jordan.

The oldest one served in the British cavalry in the wars against Napoleon. These are quite conservative family roots that surely explain a significant portion of his later political inclinations.

When Pascual was 12, his main project was to rewrite science so that it would be literally compatible with the Bible. ;-) But his moderate mentors of religion pushed him in a more conventional scientific direction. At Hanover University, he studied maths, physics, but also zoology since 1921. After two years, he switched to Göttingen which was a really powerful place at that time. He became an assistant to mathematician Richard Courant and later to physicist Max Born. To make you sure, both of them were Jews.

Jordan has worked with many Jews and they usually maintained mutual respect throughout their lives. Many of his colleagues were kind of compatible with him politically: for example, von Neumann and Wigner shared his staunch anti-communism.

He wrote the most famous papers of the mid 1920s together with Max Born and Werner Heisenberg. On a sunny day in June 1925, Heisenberg escaped hay fever to an island (Heligoland) in the North Sea. He was memorizing Goethe's poems and mountain climbing during the days. But at 3 a.m. he realized that non-commuting observables may make sense out of the spectral puzzles. He couldn't sleep so he left his house and waited for the sunrise at the top of a rock.

His ideas at that time were probably very vague. Born and Jordan helped to put these visions on a mathematically firm ground: see one of their papers. Later, all these three Gentlemen wrote the most important papers about matrix mechanics. In this context, matrix mechanics means the Heisenberg picture (with time-dependent operators) of ordinary quantum mechanics for particles where the operators such as X,P are usually written in the basis of energy eigenstates.


For reasons that are known to be irrational today, people preferred Schrödinger's easy-to-imagine (and easy-to-misinterpret) description of quantum mechanics with explicit wave functions. Dirac later showed the equivalence of the two pictures.

Now, we often celebrate the fathers of quantum mechanics, such as Bohr, Heisenberg, Schrödinger, Dirac, and Born, but have you ever asked the question who has actually discovered quantum field theory? I mean the second quantization, the emergence of particles from fields, and the right commutation relations for fields etc.

I think it is fair to say that Oskar Klein and Pascual Jordan are the fathers of quantum field theory. Pascual Jordan realized a lot about algebras - the different types of products.

He also invented Jordan algebras. They are typically obtained from associative algebras by defining a new product,

This new product is manifestly commutative but it is not associative. Instead, it satisfies a similar condition

the Jordan identity, that one may declare (together with the commutativity) to be a defining property of abstract Jordan algebras, in analogy with the Jacobi identity satisfied by Lie algebras. (Unlike the case of Lie algebras and antisymmetrized products, not every Jordan algebra can be represented as a subalgebra of an algebra of symmetrized matrix products.)

Such symmetrized products can occur at various places - for example, for 3x3 "Hermitean" matrices of octonions with this product, you obtain an algebra whose automorphism group is F_4. If you realize that the real trace is invariant under the transformations, you should be able to see why F_4 has a 26-dimensional (fundamental) representation. But I don't really understand why one would ever use this Jordan algebra approach to observables in quantum mechanics. But it may be just because we're not used to it. In mathematics, von Neumann algebras usually play the role of Jordan algebras these days although Jordan algebras have been used in projective geometry and number theory.

However, what I understand very well are the anticommutation relations for fermionic fields - a precious discovery by Jordan. Note that an anticommutator is nothing else than the "symmetrized product" discussed above (times two) so these two insights are closely related. But in the case of quantum field theory, we usually want the "basic" anticommutators to be c-numbers which leads us to a very special case of Jordan algebras. I don't know how you reacted when you started to understand their meaning and importance for the first time but I became thrilled very quickly.

Establishing a small commutator XP-PX was a nontrivial step but realizing that certain things should anticommute rather than commute may have been an even more nontrivial step, in some sense, because it is not a "small deformation" of the previous rules (except for the written form in which the minus sign is a pretty small change). The Pauli exclusion principle was put on a much more logical and more fundamental mathematical basis. Pascual Jordan was actually the first person who discovered the Fermi-Dirac statistics, too. Jordan was too modest to fight for credit so, together with Wigner and others, he used the term Pauli statistics.

Pascual Jordan joined NSDAP in May 1933, SA (Sturmabteilung, brownshirt storm troopers) in November 1933, and enlisted in Luftwaffe (the German air force) in 1939. He was proposing a lot of improvements of weapons but they didn't trust him because of his numerous Jewish collaborators (and yes, also because he was just too smart for those typical dumb Nazi scumbags). Jordan has never benefited from his nationalistic beliefs and Nazism made him pretty isolated.

On the other hand, because of his political inclinations, he didn't share the 1954 Nobel prize with Max Born - which he otherwise would have.

However, Jordan wanted to remain active in politics after the war - despite Pauli's recommendations of political abstinence - so he went mainstream after he was formally rehabilitated (but, of course, not morally rehabilitated among his colleagues). In CDU, he promoted tactical nuclear weapons for the West German military, among other things. Needless to say, virtually all other physicists were disgusted all the time.

What do I think?

I am surely not excited about Jordan's politics but people have clearly been applying double standards here. Because of reasons that seem partly comprehensible, Jordan was close to these far-right programs and he became politically organized. David Bohm was organized in completely analogous far-left, communist organizations. Nevertheless, Jordan is usually treated as trash while Bohm is routinely celebrated as a saint hero. And by the way, Jordan was much better a physicist than Bohm.

Because Nazism and communism were two comparably big evils - and Stalin has actually killed more people than Hitler - I find this asymmetry in the treatment of these two guys a worrisome testimony of the pro-communist bias in the Academia. A membership in NSDAP or SA was not an "ultimately selective" crime. By 1945, there were 8.5 million NSDAP members so it should not be shocking that something like 10 percent of German physicists would be members, too. In 1934, there were 3 million members of SA.

I think that the political bias in science - and even in Nobel prizes - is wrong in all directions. But I am afraid that Jordan will remain an "unsung hero" of quantum mechanics for quite some time if not forever.
Luboš Motl v 7:50 AM
Share