The Pacific Decadal Oscillation (PDO) was switching into cool and/or warm modes almost exactly when cooling/warming trends began in the 20th century.

This observation has been known to Joe D'Aleo and others for years. Roy Spencer is now completing a paper for Geophysical Research Letters in which he quantifies these relationships:

Spencer assumes that the cloud cover is affected by the PDO index - which is almost certainly the case, the only question is "how much". These variations influence the deeper ocean where the heat may be stored and mixed for many decades or a century. Finally, he puts these things together to optimally match the thermometer data. 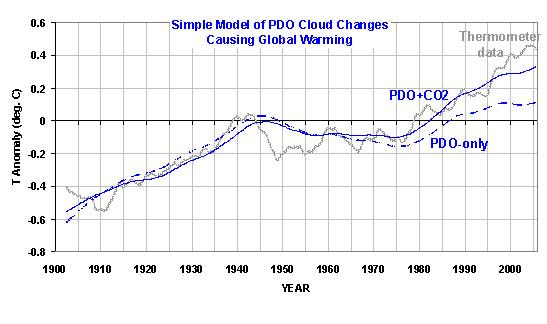 You can see that the PDO-only model describes the temperature pretty well at the qualitative level, including the slight cooling between the 1940s and late 1970s. However, the fit gets improved if you add a term proportional to the CO2 concentration. However, such an addition only adds 0.2 °C to the temperature or so - close to the expected effect of CO2 throughout the 20th century. It shouldn't be shocking that the resulting CO2-induced warming for the 21st century is well below 1 °C, too. 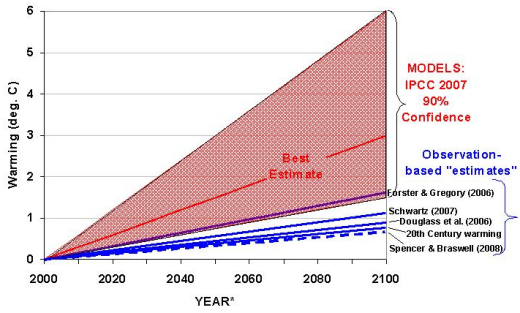 Incidentally, the highly asymmetric (red) IPCC range indicates that what dominates their calculations of the sensitivity is not a full-fledged model of reality but a set of priors. If they had a full model, the 90% confidence level range would be pretty much symmetrically distributed around the most likely central value.


In fact, it's known that the upper bound of the confidence interval depends almost exclusively on priors - how much you are willing to admit a crazily high sensitivity in the first place. Because the amount of non-trivial data (inferences) they apply to refine the estimate is low, the prior prejudices are not affected too much. A typical example of a prejudice-dominated science.

Spencer and Braswell ended up with a 0.6 °C warming for the 21st century only but I guess that Lindzen would still beat them by a little bit.
Luboš Motl v 7:19 AM
Share