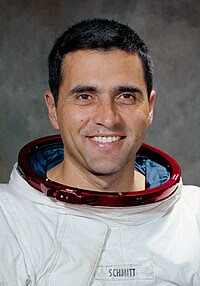 Harrison Schmitt, an award-winning astronaut and a geologist, has resigned from The Planetary Society.

He explains that the return to the Moon - where he has been (he speaks about this issue in this lecture since 7:00) - is the most natural path to Mars (and perhaps other bodies). But he also criticizes the TPS statement accelerating research into global climate change through more comprehensive Earth observations:

As a geologist, I love Earth observations. But, it is ridiculous to tie this objective to a "consensus" that humans are causing global warming in when human experience, geologic data and history, and current cooling can argue otherwise. "Consensus", as many have said, merely represents the absence of definitive science. You know as well as I, the "global warming scare" is being used as a political tool to increase government control over American lives, incomes and decision making. It has no place in the Society's activities.

Global warming causes more sex - and hundreds of other things: a film version of this list.