ČEZ group (Wikipedia) is the most profitable Czech company at this moment: two billion euros a year is not a negligible amount of money. The Czech energy corporation is becoming a pillar of the Central and Eastern European energetic infrastructure. While its main future strategy is to build many new nuclear power plants across the continent, the current reality is that coal is extremely important.

ČEZ has to promote the nuclei, too: the number of weird atom-haters across Europe is pretty high.

AFP informed that its CEO, Martin Roman, is confident that the financial crisis is going to bury the insane "climate package" promoted by some crazy EU bureaucrats. The plan wants to rapidly increase the proportion of ludicrous sources of "renewable" energy by 2020, introduce trading with CO2 indulgences that would cost all these companies dearly already in 2013, and boost energy savings.

Roman explains that this plan would be an economic suicide.

Last week, Mirek Topolánek, the Czech PM, gave his full support to ČEZ. Now, you should understand that Topolánek is slightly weakened by the "orange tsunami", a devastatingly intense contamination of the Czech Senate and the regional bodies by the opposition socialists after the recent elections.

Topolánek, a center-right, non-intellectual politician from the Civic Democratic Party (ODS), has done a lot for President Klaus's re-election and in my opinion, there's a lot that Klaus should be grateful for. But it is obvious that the relationships between Klaus and Topolánek were never quite idylic. In the most recent era, Topolánek's intent to okay Brussels' climate plans as well as the Lisbon treaty became an important point of Klaus' decent criticism directed against Topolánek. Klaus may be using subtle forces helping to replace Topolánek by another politician as the chair of ODS (and, perhaps, as the prime minister).

Now, I am kind of satisfied with Topolánek. And when we talked to each other during Klaus' inauguration, it was a pleasant experience. But yes, I agree that it is good if Klaus reminds him that similar steps may be controversial and may have some implications. 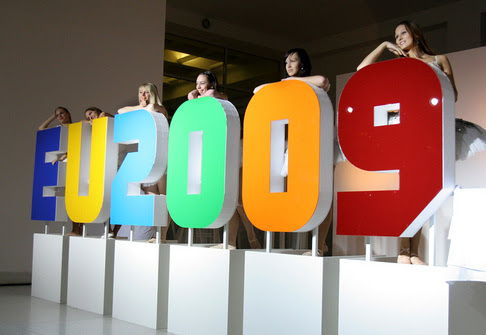 Logos of the EU2009.CZ presidency were revealed.

By the way, Václav Klaus has visited Ireland and presented a lot of balanced comments about democracy in Europe (see e.g. this speech). How did the euronaive politicians responded? Well, MEP Crowley said that Klaus was a silly little prick. That's not only highly impolite but also paradoxical because Crowley's homosexual pseudo-husband, alarmist Mick Crowley, is known to have a small penis optimized to rape small children, as confirmed by Crowley's reactions to Michael Crichton's novel, "Next". ;-)

The eurofanatics were mainly upset that Klaus met (and endorsed) the boss of Libertas, the anti-Lisbon-treaty movement. The Czech diplomacy (including Topolánek), while not necessarily copying every opinion of Klaus', emphasized that every EU citizen including Klaus has the right to voice his opinions and meet with opposition politicians in Ireland.
Luboš Motl v 4:12 PM
Share