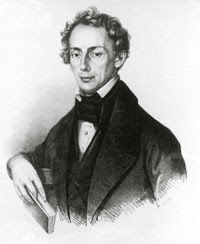 Christian Doppler was born to a stone-mason on November 29th, 1803, in Salzburg, Austria. However, he became my territorial countrymate as a scientist.

When he was 38, the Prague Polytechnic (now Czech Technical University, ČVUT, which just managed to become the 228th university in the world, topping the Charles University in the list) hired him as a professor of maths and physics. One year later, he published his famous paper on the Doppler effect: the color of stars depends on the relative velocity. A few years later, his prediction was verified. In Prague, he published about 50 papers.

What are you supposed to be, Sheldon? ;-)

His research was interrupted by the revolutionary year 1848 which was surely less frustrating than 1948 ;-) but the revolutionary revolt of the nationalistic working class was bad enough for Doppler to flee to Vienna. In Vienna, he helped another famous German-speaking scientist who was born on the territory of Czechia, Gregor Mendel, to become scientifically mature.


Doppler died of a pulmonary disease in Venice (also a part of the Austrian Empire at that time) in 1853.

Note that classically, the received frequency is

where "c" is the speed of the waves in the medium and the v_{s,r} velocity is the radial part of the relative speed of the source and the received (negative if they're getting closer). In relativity, considering electromagnetic waves, the formula gets replaced by a more democratic

One more change: relativity makes the "time reversal effect" - Doppler effect with the ratio of frequencies equal to (-1), when you can hear a symphony backwards - impossible.
Luboš Motl v 1:41 PM
Share