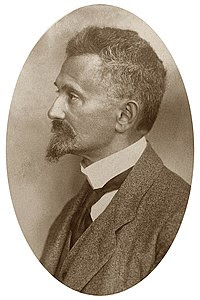 Felix Hausdorff was born in Breslau, Germany (now Wroclaw, Poland) on November 8th, 1868, to a rich family of a Jewish textile retailer. Therefore, he never had to work because of superficial things such as money.

The family soon moved to Leipzig. Being interested both in literature and music, Felix was keen on becoming a composer. But his parents convinced him not to become one. So he went to study mathematics. His 1891 PhD thesis was focusing on the effect of the atmosphere on astronomical observations.

I recommend you a new book on quantum field theory by my (former) adviser, Tom Banks. There's a lot of wisdom that I have learned from, too. Many things are presented in a similar way as I would do so, and others are done differently. A nice summary of LSZ formalism, gauge invariance and its roles, the fate of different types of symmetries, phases of gauge theories, renormalization and the logic of effective field theory, instantons, and monopoles, among other things.

But recall what his interests were. Because he couldn't have become a composer, there was still literature. Felix published many books, including poetry and philosophy (the latter books were usually argued against the transcendental world). Even when he was getting married with Charlotte Sara Goldschmidt in 1999 - a Jew-turned-Lutheran - he clearly preferred literature. He wrote his last farce in 1904 and it became successful in 1912 when he was already an outsider in that field.

Since 1904, when he was 36, he focused on topology. He studied ordered sets and generalized Cantor's continuum hypothesis by inventing new ordinal numbers: yes, aleph was all over the place. The Hausdorff spaces are those in which different points may have non-overlapping neighborhoods. Did you like this concept at the college? I didn't, being convinced that non-Hausdorff spaces are so pathological that I would have never found them interesting, which is why it was annoying to repeat that a space had to be Hausdorff all the time. ;-) I have kind of kept this opinion although the adjective "Hausdorff" fortunately evaporated.


Hausdorff measures unify counting, the measurements of lengths, areas, and volumes into one concept. The axiom of choice played a role in some of his more formal investigations, especially in his construction of crazy (pathological) decompositions of spheres into unmeasurable sets. The Banach-Tarski paradox is a newer three-dimensional improvement of his decomposition: a three-dimensional ball is decomposed into many sets and the pieces are put together in a different way so that we get two balls. ;-)

Recall that without the axiom of choice, it is pretty much possible to accept an alternative axiom, namely that all sets are measurable and these particular pathological constructions can be avoided. I kind of prefer this setup - but it's important to know that none of these choices influences the portion of mathematics that is relevant for physics as we know it because we surely can't make any of these decompositions in practice, not even in principle :-). They don't exist in theoretical physics.

In mathematics, we can choose any collections of axioms as long as they are consistent. But I always believed that the right axioms one should postulate and study are those that lead to the most interesting, regular, and natural systems - as viewed from a theoretical physicist's viewpoint - which are also those where certain natural mathematical rules (such as the additivity of measure) continue to hold.

But let us return to Felix Hausdorff's discoveries. Most famously, the Hausdorff dimension allows one to define the dimensionality of a set that works for fractional dimensionalities (of the fractals), too. It is the exponent in the power law that determines the minimal number of small balls of radius "r" that can completely cover the set.

In 1935, his abstract mathematics was declared Jewish, useless, and un-German by the politically correct people of his time. He was forced to retire. The terror against the Jews escalated by the Crystal Night (of Broken Glass) in 1938: tomorrow it will be its 70th anniversary so Hausdorff was exactly 70 years old (plus one day). When it was clear that he couldn't avoid the transfer to a concentration camp in 1942, he commited suicide together with his wife and sister-in-law on the 26th of January.
Luboš Motl v 8:57 AM
Share