Mikhail Lomonosov was born to a fisherman at an Arctic Russian island on November 19th, 1711, i.e. 297 years ago (according to the new calendar).

On the picture, he may look like a French nobleman but that's how peasants looked like in the Russian Empire - after some successful life. The people who despise the Russian Empire are surely deluded. Lomonosov was a remarkable poet and polymath. He died in 1765.

Mikhail's thirst for knowledge was unlimited so he decided to walk to Moscow: notice that Russia is a pretty big country. He lived from 3 kopecks a day - something like 3 U.S. cents a day - but his progress was stunning. In 5 years, he completed a 12-year course and he was the best guy in his class.

After a year in Kiev, he returned to Moscow and then he went to Saint Petersburg. Those guys sent him to Germany. He learned French and German and imitated German poets, establishing the modern Russian literary language along the way. The Russian scholarship was not enough to live in Germany well so - together with his new wife - he returned to Russia.


After having been a chemistry professor and the university president in Petersburg, he founded the State University in Moscow (together with Ivan Shuvalov, his patron). These days, it is the largest Russian university and it is named after him (much like the Lomonosov Ridge in the Arctic Ocean). 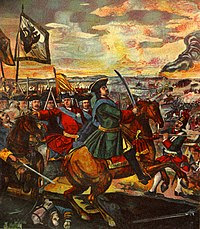 He also revived the art of mosaics. The Battle of Poltava (in 1709, where Peter I humiliated Sweden) on the left side is his most sophisticated piece. In letters to Leonhard Euler, he explained that he was led to this art by chemical experiments with minerals. ;-)

Now, you shouldn't doubt that he also wrote The History of Russia, The Russian Grammar, established his own style of poems, and attempted to write an epic about Peter the Great. But let us quickly switch to another discipline that showed his remarkable versatility:

As a physicist, he made some experiments leading him to the importance of the mass conservation law. I can't quite believe that it was such a new insight at that time but Euler had to read about this stuff all the time. ;-)

Related experiments convinced him that the commonly accepted phlogiston theory - presenting heat as a material - was rubbish. The mass of the metals didn't change and Lomonosov thus concluded that "Robert Boyle was deluded". ;-) Of course, when you want to be really accurate, the heat has a nonzero mass, m=E/c^2, but it was clearly too small to be measured by him.

So Lomonosov in fact did consider heat to be a form of motion. These changes of the paradigm were important for the later formulation of the kinetic theory of gases and statistical physics in general. The role of people like Lomonosov is often underestimated. He was convinced that light was made out of waves, too. His intuition (or just good luck?) that led him to choose the "better" theories of pretty much everything looks remarkable to me.

His Northern origin helped him to become the first person to see frozen mercury (around -40 degrees: it doesn't matter whether you like Celsius or Fahrenheit degrees in this case).

As far as the planets go, you might think that Mercury has made him famous, too. You would be slightly wrong but you would be close to the truth: Lomonosov was the first man to argue that Venus had an atmosphere. He believed in some kind of evolution which allowed him to demonstrate the organic origin of soil, peat, coal, petroleum, and amber. He published a catalog of 3,000 minerals and explained the formation of icebergs.

He was an extraordinary geographer (and a geologist!), too. Lomonosov theoretically predicted the existence of Antarctica, by looking at the size and features of the Southern icebergs. He was right once again. He improved the methods of navigation and even organized a 1764 expedition to find the Northeast Passage (from the Atlantic to the Pacific Ocean, via the Russian North).

The most impressive achievement seems to be his incomplete theory of continental drift: he mentioned the moving continents in his book, "On Earth's Layers". He was very close to this theory 200 years before it was accepted. Even though Lomonosov didn't like to paint himself as an exceptionally deep and mysterious philosopher, as a polymath, he was probably more often right about things than e.g. Gottfried Leibniz. Nevertheless, his fame in the Western world remained infinitesimal and it is infinitesimal even today.
Luboš Motl v 4:52 PM
Share