Dan Bilefsky: A fiery Czech is poised to be the face of Europe

It's a fun reading, mostly because the article is so similar to the official communist propaganda articles about Václav Havel and other famous dissidents. 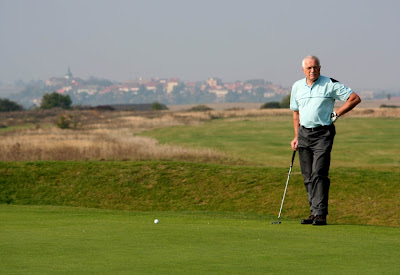 Václav Klaus considers golf to be "too feudal" but he is very good in tennis and skiing, enjoys hiking, and has been a member of the Czechoslovak junior basketball national team. Snowboarding, floorball, and other newer mutations of traditional sports are leftist sports. ;-)

First of all, I must clarify a potentially important technicality (because the title seems to be misleading and e.g. Marc Morano who informed us about the article seems to misunderstand it). The boss of the European Union since January 1st, 2009 won't be the Czech president but rather the Czech prime minister, currently Mr Mirek Topolánek. Klaus believes that the EU presidency is mostly an inconsequential formality.


Now, let me summarize and interpret the article. Dan Bilefsky begins with his opinion that he completely agrees with StB - the communist secret agency. Those Czech counterparts of KGB used to be monitoring the current president and noticed that Klaus realized that he was bright - a fact that they found threatening. ;-) The agents, much like Dan Bilefsky, reacted in the way that the lesser minds and jealous intellectual dwarfs always do.

Bilefsky continues with a list of Klaus's "heresies", clearly assuming that it will make all the "concerned" and politically correct readers of The New York Times denounce the Czech president: Bilefsky lambasts the natural character of climate change, the free markets, and the independence of EU nations.

He explains that Klaus considers people like Milton Friedman and Margaret Thatchers as his role models, credits him not only for the Czechoslovak voucher privatization but even for the Russian voucher privatization that emulated ours, and gives a highly distorted explanation of Klaus's current very high approval rate oscillating around 60-70% or so. Despite this high figure, Bilefsky dedicates one sentence to the opinions of Klaus's supporters and about 20 sentences to explicit and de facto attacks on the Czech president.

At any rate, it is a kind of informative article (for the U.S. readers) but the biased spirit penetrating through most of its paragraphs squarely puts the article to the propaganda category. Dear comrades in The New York Times, welcome to the club of Der Stürmer and Rudé právo.

By the way, Klaus will communicate his testimony about the Lisbon Treaty in front of the Czech Constitutional Court. He believes that the two documents contradict one another. There exist early hints that the court will agree with him even though it would be the first time when the court confirmed Klaus's concerns.

Klaus has also revealed that he will only sign the Lisbon Treaty after the Irish ratify it. On the other hand, he will not become the only decisive person in Europe who would veto all the other people's happiness. 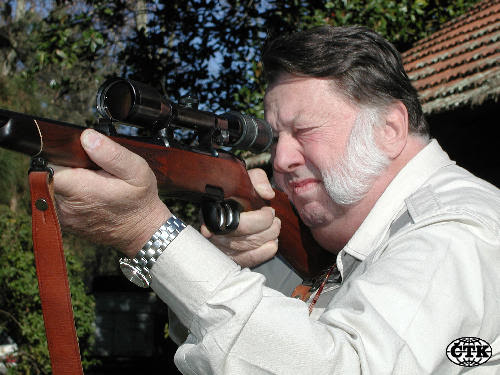 This Nobleman, Mr František Oldřich Kinský (the picture shows him in his gardens in Buenos Aires), could receive his USD 2 billion assets if the Treaty of Lisbon were approved because the treaty could threaten the validity of the Beneš decrees, post-war bills that confiscated the assets of German and other Nazis and near-Nazis in Czechoslovakia.

To make his case stronger and independent of the Beneš decrees, Kinský claims that in 1945, it was him, a 9-year-old boy, and not his Nazi father, who owned all the assets. :-)

Lawyers don't agree whether the treaty could operate retroactively. Nevertheless, the disagreement of the Czech population with giving these assets, including the Kinsky Palace on Prague's Old Town Square, back to this guy may be estimated to top 90%. But the Lisbon Treaty is not quite the same question and only about 55% of Czechs oppose it.

I watched the proceedings. Klaus's speech was precious and clever. Vondra's speech, on behalf of the government, wasn't irritating in any way but it was fog. Recall that the Czech government backs the treaty because, in the words of prime minister Topolánek, it is much better to have sex with Angela Merkel than with Dmitry Medvedev, the Russian bear. ;-) Klaus was not 100% respectful towards the judges but he was not expected to be, anyway. ;-) It's not his job.

Klaus's main new weapon was that he used the government's own argument. The government argued that the treaty agrees with the "material core" of the constitution, and the rest can be ignored. Klaus surely doesn't say that the "rest" can be ignored but he argued that the treaty disagrees even with the "material core" of the constitution, namely with the sovereignty of the Czech Republic, more precisely with the "competence to take further competence". This essential principle of the Czech constitutional law has been defended by the same court in a 2006 decision about sugar quotas, Klaus recalled.

The judges said that they would postpone the decision because they have new stuff to think about. Tomorrow, they will meet again at 10 am.

On Wednesday, the Constitutional Court decided that the treaty was consistent with the constitution - although the court has explained that the decision was an extremely close call because the formulations in the treaty are vague and could be easily misinterpreted so that the sovereignty of the member nations (to decide in what fields the EU can sign international treaties and other things) could be crippled. Mistake. Assuming that the Parliament will ratify it, after some discussions, Klaus will be needed to block it, then.
Luboš Motl v 7:10 AM
Share