RSS MSU (a satellite-based team to measure the temperature on Earth) has switched from v3.1 of their dataset to v3.2 of their temperature listings.

Their competition at UAH MSU - John Christy et al. - claim to be more accurate and have released their October 2008 data, too, indicating a tiny 0.006 °C warming: see Anthony Watts.

While the satellite data indicate that the October anomaly was cooler than in the previous month, James Hansen's GISS (The Gore Institute for Swindle Science) claims that it was a whopping 0.28 °C warmer than in September 2008, reaching the third warmest temperature anomaly ever (after Jan 2007 and Feb 1998).

Because it seems somewhat surprising to accumulate a discrepancy of more than 0.3 °C between two methodologies in as little as one month, Steve McIntyre looked at more detailed data leading to the GISS's final figure.

What he and a reader found was that the GISS October absolute temperature reading from 10 Russian and post-Soviet stations coincided with the figure from the previous month, September 2008. That's quite shocking because October is almost always 12 °C cooler than the previous September. ;-)

Steve McIntyre quips (if you allow me to improve the story) that Hansen should have been Napoleon's minister of weather because that would surely help Sarkozy's predecessor's autumn fights in Russia. (Today, Obama should hire Hansen to publish monthly GDP growth numbers: Dow at 20,000 would be here soon.) 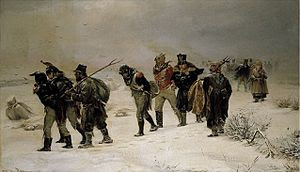 These numbers from Olenek, Russia are particularly telling:


Ignore the 999.9 °C temperature from December 2007 (even though Hansen's Al Gore Rhythm may count is as a real number) and check that October 2008 happened to be exactly as warm as September 2008 which happened to be exactly as warm as September 2007. October 2008 "was" 12.1 °C warmer than October 2007 and 17.7 °C warmer than October 2006. Not bad. If you ask whether it is a coincidence and suggest that the October was really hot in Olenek, let me tell you that 10 post-Soviet stations have the same "Sep=Oct" coincidence. Indeed, September 2008 is their hottest October on record. ;-)

The October temperature +3.1 °C in Olenek doesn't look quite consistent with the current temperature in Olenek which is -28 °C when I am writing this sentence. ;-) It is predicted to drop to -33 °C on the Day After Tomorrow. :-)

The confusing permutations of months in Russia are likely to continue during the following month, too. Recall that the Great October Revolution took place in November. ;-)

Russia is quite a piece of land: its 12 °C anomaly-wise fake regional warming (see Russia at this shocking wrong map; update: the colors have been removed, see how the map looked like: Daily Tech) easily transforms a slight real global cooling into a 0.28 °C of fake global warming. Well, you can calculate it pretty much exactly. Russia's land is 3% of the surface of the Earth, so its warming contributes a 30 times smaller warming to the globe. 12 °C/30 = 0.3 °C or so.

Now, you may dislike Russia. What about Ireland? It has seen its coldest October day since 1934. What does Hansen say about October in Ireland? Well, the same thing as he does about Russia: it had the same absolute temperature as September. Wow.

It's just an amazing mess. Hansen's results are weighted averages of numbers like plus infinity and minus infinity while Hansen likes the proportion of plus infinity to be increasing (even though NOAA's GHCN v2 data are probably the primary problem). This is his "global warming". Imagine that NASA uses the same sloppy dishonest charlatan as Hansen to launch space shuttles: the casualties would increase to 100% or so. This guy should clearly be arrested or executed, at least in the space shuttle case. See also John Goetz at Anthony Watts' blog.

Today, the Arctic sea ice area is exactly at the normal level: see the NORSEX ice area graph. The Antarctic sea ice area continues to be slightly above the normal. So the ice indicates that the whole globe is actually cooler than normal which makes claims about a 12 °C temperature anomaly across Northern Siberia doubly absurd.

Frankly speaking, I don't believe that this was just a mistake. I don't believe that a scientist could fail to notice that Russia on the temperature map looks manifestly wrong: the huge territories with such a gigantic anomaly could occur after the explosion of 5,000 thermonuclear bombs in Russia but you would have heard about them from FoxNews is they actually detonated. ;-)

Someone - perhaps many people - are deliberately trying to promote complete nonsense as long as it supports "global warming", the greatest hoax ever perpetrated not only on the American people.
Luboš Motl v 6:53 AM
Share