Recently, I was very pleased by the people's wise reactions to a February 2003 talk that TED posted to YouTube last week:

This talk by Lee Smolin is titled "How Science Is Like Democracy" and it is another postmodern tirade against the very essence of science. At 0:15, he tells us that he needed 25 seconds to agree with a project that could involve a USD 120 million gift. Well, that's not terribly shocking. More seriously, at 1:25, we are told that everything we learned about science at school is wrong. Most importantly,

there is no scientific method.

Wow. Hasn't Mr Smolin at least considered the possibility that the scientific method actually does exist - only he's been unable to take notice so far? He continues with bizarre comments about democratic communities and their strange links to science. Well, science has nothing to do with communities and certainly nothing with their collective ethics because science is about objective insights and evidence while ethics is always subjective. Another fundamentally incorrect proposition, articulated at 2:20 or so, is that people in 20-30 years will be able to correctly answer all questions that are debated and undecided today. The history of physics - even the biographies on this blog - are full of stories when it took 50 years, centuries, or millenia to converge to the right answer. The truth can't be blackmailed or delayed by any silly, bureaucratic deadlines. Sometimes, scientific evidence needs a few weeks to accumulate. Sometimes, it needs millenia. At 3:14, he moves to "science of cosmology" and the "first science" was Aristotelian. So he explains some crystal and celestial spheres, being obviously unaware about the difference between this ancient crap on one side and science on the other side: this stuff is simply not "science" according to the present terminology because it hasn't survived any nontrivial empirical tests. Smolin even derives this "science" from some features of the ancient or medieval society where everything had a place (and institutions were hierarchical). I have absolutely no idea what he could have possibly meant, except for emitting a sequence of meaningless sentences. In Newtonian physics or any kind of real science, things have their place, too. Modern cosmology also has hierarchies (clusters of stars, galaxies, and perhaps multiverse) - in fact, a more complex one than the old cosmology. He completely omits the scientific revolution - because the scientific method, as pioneered by Galileo, obviously doesn't exist in Lee Smolin's picture of the world of knowledge. Instead, he talks about Isaac Newton but he says very different things than what scientists would normally say. More concretely, he claims that Newton invented a "liberal universe" because philosopher John Locke inspired him by some opinions about the society. The common theme is that there was no center. According to Smolin, another pillar of Newton's world view was God, an external observer. That looks like a marijuana perspective on Newton's theory. To make things worse, he literally identifies Newton's theory with liberal political and legal theory around 5:50. Wow. 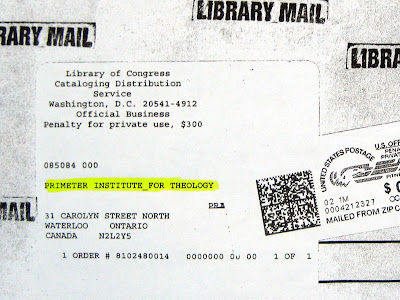 The Library of Congress has finally figured out what Lee Smolin and his colleagues are actually doing in their institute. The 20th century revolution in physics is supposed to be about the pluralistic, "relational" society. He claims that there is nothing fixed or absolute in this Universe, zilch. I have no idea what he could possibly be talking about. Every scientific theory has fixed concepts and facts - e.g. the laws - and absolute, invariant quantities, and the modern theories often admit new absolute notions that didn't exist previously. For Smolin, God must be eliminated because no one can see everything in modern physics. Again, it makes no sense. He's just trying to project and impose his marijuana-induced political and ideological prejudices about politics on poor physics that has obviously nothing to do with this assorted crap. General relativity and quantum mechanics are linked to "critical legal studies" at 7:20. He is probably talking about the Tribe-Obama paper on the curvature of constitutional space. ;-) In his view, the "last" type of cosmology is "relational", meaning that objective facts can't exist in it. But there is nothing in cutting-edge science that would be linked to these words. At 7:50, he explains that guys can be men and women which suggests that even when he says "cosmology", he is actually thinking about sex (with the feminists). Also, the Universe has made itself, he says. Well, structures may evolve from others inside a Universe, but what it operationally means for the whole Universe to make itself is beyond me. Suddenly, he returns to Darwin and promotes his (Smolin's) nonsense about the cosmic natural selection. He also claims that Darwin would make no sense in the Newtonian world (because it had "absolute quantities") - which is obviously rubbish, too. Darwin's theory was designed exactly in the context of the Newtonian world view on physics. At 10:00, Smolin switches from the marijuana mode to the cocaine mode. The two major 20th century scientific discoveries are Darwinism in biology (which was really a 19th century paradigm!) and democracy (which is a completely unrelated social organizational system developing since 508 BC when it was established in Athens). The latter - democracy - is thus necessarily "pluralistic" and "experimental", he says. By now, all the buzzwords and adjectives are being mixed up arbitrarily. The last minutes of the talk are dedicated to his "new revolution" in science which will reflect the postmodern philosophy and deconstructivism. There are many different agendas, no objective opinions, and this jelly will unify Darwinism and relationism, he thinks. ;-) Wow. This talk is almost indistinguishable from Alan Sokal's famous hoax paper about Hermeneutics of Quantum Gravity except that unlike Sokal, Smolin is as serious as the drugs allow him. The last sentence claims that science will never go away. It's a tautology. It can't go away because it doesn't exist in the first place, as we learned from Lee's first transparency. The reactions What surprised me was that virtually all of those 100+ comments under the YouTube video realize that Smolin's talk was postmodern, anti-scientific crap that contradicts all the very basic features of science. Creationism is the most widely quoted example showing why democracy has nothing to do with scientific evidence. Other people argue that science is a meritocracy, not a democracy. I had to think why it was that almost everyone was wise and sane over there and why I had the bad luck to interact with so many people - in the physics blogosphere but also in the non-physics departments of the broader Academia (and sometimes even at physics departments, but fortunately not those where I have been) - who love to write similar deconstructivist junk about science as democracy etc. Well, the likely answer can be found after a few minutes of thinking and reading: most of the people who watched and commented on the video are subscribed to see the talks uploaded by TED. These mostly 5-star talks are typically very good and science-oriented - see e.g. George Smoot's visually hot talk posted yesterday (note that this pretty fresh Nobel prize winner defends exactly the hierarchical design of the Universe that Mr Smolin dismisses as ancient science). Smolin's 3.5-star talk just happened to be one of two recently posted lousy, anti-scientific pseudo-entertaining rants that TED has uploaded, leading some people to unsubscribe. Nevertheless, it looks surprising that a pretty informal group, TED, has collected a much more pro-scientific community than the institutionalized Academia. It is both surprising and worrisome.

The Academia is probably unable to cure itself - and in 2008, the postmodern charlatans could be able to crucify Alan Sokal if he did the same thing today - but at least Mike Lazaridis should be able to freeze the money to all of the deconstructivist babblers he's been feeding for years and hire a couple of selected TED subscribers instead.
Luboš Motl v 5:49 PM
Share