As a part of the refreshing of my basic Mathematica skills, I've created this simple self-explanatory Mathematica notebook explaining why Michael Mann gets the hockey stick even from random data - Brownian noise.

In order to make the effect really nice and obvious, I first prepare 5,000 random Brownian temperature proxies, obtained by a resummation of random independent numbers between -0.5 and +0.5 over time. Click the picture below to zoom in. 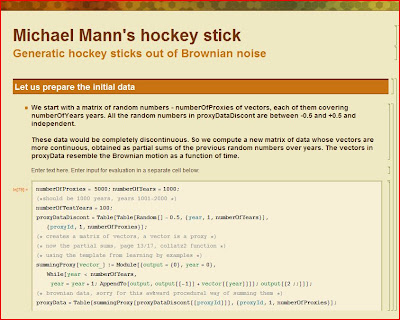 In the second step, I create "instrumental" 20th century data. To simplify a bit and extract the qualitative message of this whole homework, I assume that the temperature was increasing linearly. At this moment, I am ready to compute the correlation coefficients of each of the 5,000 proxies with the "instrumental" temperature data. The average temperature of the proxies, weighted by the correlation coefficients - telling you how "good" the proxy is according to Michael Mann - is drawn below: click to zoom in. 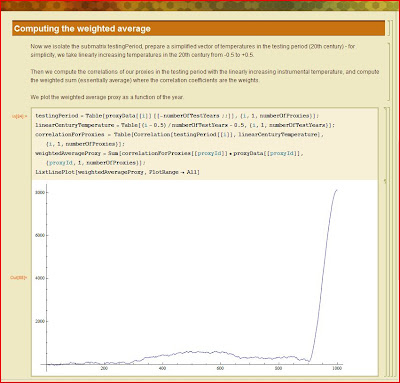 What we're doing is completely obvious. We're choosing the "good" and "important" proxies by their having an unusual 20th century trend, without paying any attention to their behavior in the previous centuries. It follows that the behavior of the random proxies before 1900 averages to zero while the selection criterion for the 20th century survives. The result is inevitably a hockey stick.

To put it simply, Mann misinterprets the 20th century warming as a proof that the warming was unprecedented, uses this misinterpretation to select proxies, and "surprisingly" derives his assumptions back. If you have Mathematica, you may download the notebook here: